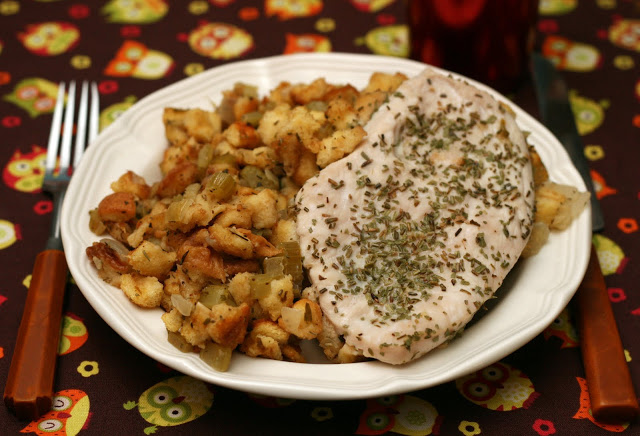 Directions:
Spray a 9×13 inch pan with cooking spray. Set aside. Preheat oven to 350.

Heat the butter and oil in a skillet. Saute the onion, garlic and celery over very low heat until the onion is translucent and the celery is soft but neither is browned. Toss with the bread cubes, salt, pepper, herbs de Provence and celery seed. Pour the stock over the mixture and mix until well distributed. Spoon the stuffing mixture into a 9×13 inch baking dish. Smooth out with a spoon.

Sprinkle both sides of each cutlet with tarragon, rosemary and salt and pepper. Arrange in a single layer over the stuffing. 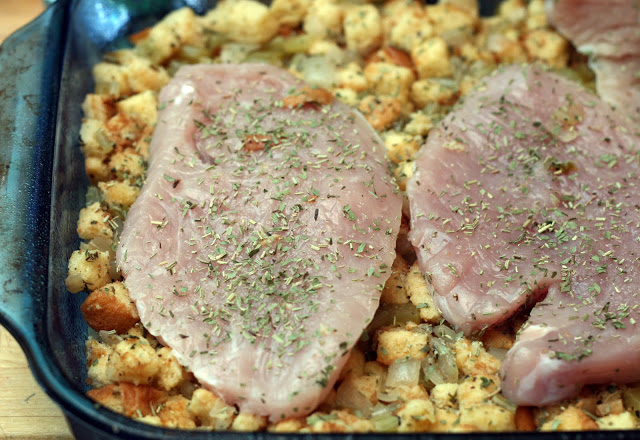 Cover the baking dish with foil. Bake for 45 minutes or until the turkey is fully cooked and the stuffing is bubbly and crispy around the edges.

Note: You could assemble the casserole the day or morning before cooking and refrigerate until ready to bake. Add 10 additional minutes to the cooking time and take care using cold glass containers in a hot oven.

*I found a bag of these on sale at the farm store. I hadn’t seen or used them before but maybe they are super common, I don’t know. At any rate, you could just cut slices of potato bread into 1/4 inch cubes yourself.

I can count on one hand how many non-mac and cheese casseroles I’ve made in my life. I generally just don’t think of them when meal planning. Until I spotted a bag of soft bread cubes, I’d only come across the crunchy crouton kind and since we are a soft stuffing family, I was never interested in them. But soft bread cubes made from bread I’d probably buy anyway sounded good. I picked up a bag without really knowing what to do with it since Thanksgiving had long past and since I hadn’t used them before, I wouldn’t have wanted to trust them to a holiday either. I really do like stuffing with turkey so I thought of using them in sort of a turkey-stuffing bake aka a casserole. The supermarket I frequent always has a ton of turkey and turkey pieces for sale so I picked up a pack of boneless turkey breast. I guess I could have made this with bone-in, skin-on turkey pieces but I’d rather avoid cutting up a whole turkey and I didn’t need to make quite that much food. The breast cutlets were the perfect choice. They added flavor without a lot of effort and were easier to eat than lifting those big pieces out of the stuffing. Plus it cooks much more quickly than whole pieces could making it perfect for weeknight dinner. I love not having to wait for a special occasion to eat turkey and stuffing! The turkey was perfectly moist and the stuffing was soft under the turkey and crispy on the bottom and edges just like I like it. It was the best parts of Thanksgiving in one pan and it didn’t take long to make at all.