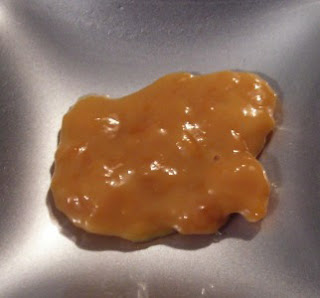 Directions:
Using a can opener, open the can half way. Do not pull back the lid, leave it in place. Place in a deep sauce pan and fill the pan with water just to the edge of the top of the can. Simmer over low heat, 4-5 hours or until a thick, creamy caramel forms, adding more water as it evaporates. Take care to keep the water level as close to the top of the can as possible for best results. After the 4 hours, use an oven mitt to remove the can from the pan and allow to cool. Remove the lid and serve. Store leftovers, tightly covered, in the refrigerator.

I’ve always wanted to make dulce de leche (AKA confiture de lait, doce de leite or cajeta) but have always been put off by the “can might explode” warnings that are both on the can and that accompany the typical dulce de leche directions that state to totally submerge an unopened can in water and allow it to simmer for hours. Apparently, pressure can build up in the can and cause some sort explosion, especially if you are not careful and too much of the water evaporates. I have never actually met anyone this has happened to, but I sort of feel like if there is a 1 in 100 chance something might happen, more than likely, I will be that one. So I never attempted it. Then, the other day, I got to thinking-what if I opened the can slightly to release the pressure? So tonight as an experiment I opened a can part way but didn’t peel back the lid, so it remained “closed”, and just filled the pan up to the edge of the can so no water would get in to dilute the caramel, but that the majority of the can was covered. To my delight, it worked perfectly. The tiny 1/8 inch of condensed milk at the very top was slightly lighter in color, but was easily mixed in to form a delicious, thick and creamy caramel treat, perfect for dipping cookies and fruit or spreading on anything you can imagine. Best of all, it costs just a fraction of the amount a prepared jar goes for at the supermarket, and tastes even better.