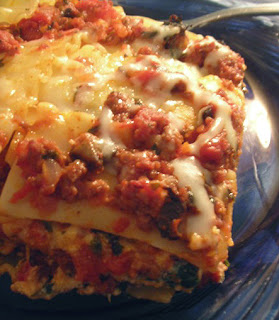 Directions:
Preheat oven to 350. Bring a large pot of water to boil. Boil the lasagna noodles until almost al dente. Arrange the boiled noodles in a single layer on cookie sheets until assembly. Meanwhile, stir together all of the cheese/spinach filling ingredients until uniform. Set aside. Then,heat the oil in a large saute pan. Add the beef and brown*. When beef has browned, add the onions, garlic, carrots and mushrooms. Saute until the vegetables are soft. Add the milk and cook over high heat until the milk has evaporated to prevent the sauce from becoming acidic after adding the wine. Add the wine and continue to cook over high heat until the liquid has evaporated. Add the tomatoes and turn the heat down low. Simmer for at least 1 hour. You can cook it longer if you have the time, the flavor improves with more cooking, but an hour yields a perfectly tasty sauce. Add the parsley and cook for 5 more minutes. Ladle some of the sauce in the bottom of lasagna pan. Arrange the noodles in a single layer, overlapping as necessary. Spread with the spinach/cheese mixture and top with more sauce and another layer of noodles. Repeat until the pan is full, reserving some sauce to coat the final layer of noodle. Sprinkle with parmesan. Cover in foil and bake 45 minutes. Remove foil and continue to bake 15 additional minutes or until bubbly and hot. Allow to sit 5 minutes before serving.

* At this point, if you didn’t use low fat ground beef, you can drain the fat and then add 2-3 tablespoons of olive oil.

I think a lot of people, my husband included, think of lasagna as this big, drawn out affair. I don’t see how it is any more difficult or time consuming than so-called “easier” baked pasta dishes like baked ziti, and layering noodles is quicker than stuffing shells or manicotti. The hands on time is really minimal: 2 minutes to stir the cheeses together, brief hands on time with the sauce followed by ignoring it while it simmers, about 10 minutes for assembly and you are done. The 1 hour bolognese sauce (which, in a secret Rachael Ray-esque way, I think of as bologn-easy sauce) tastes like you have been making it all day, and totally eliminates the need to cook any other sort of meat separate from the sauce. You do have to be around while the sauce cooks and the lasagna bakes but they honestly need little monitoring. Unbaked lasagna also freezes well, so you could make it ahead (or make two and freeze one) but I find that frozen lasagna often takes twice as long to bake, so it might be just as quick (if you don’t mind some prep) to make it fresh.