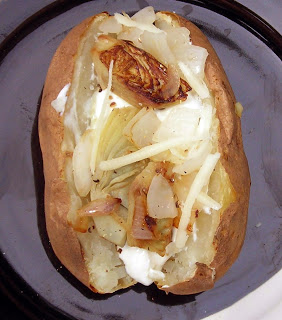 Directions:
Preheat oven to 400. Pierce a potato and place it in an oven. Bake 1 hour or until soft. About 20 minutes before the potato should be done, heat the olive oil in a skillet. Add the onion and artichoke, sprinkle with salt and pepper and saute until caramelized, about 10-15 minutes. When the potato is done, slice it nearly in half lengthwise. Top with sour cream, onions, artichokes and a few slivers of asiago cheese. Eat immediately.

Recently I had the pleasure of reading Alone in the Kitchen With an Eggplant edited by Jenni Ferrari-Adler, collection of essays about dining alone. It seems like people fall into two camps, those who make the same sort of meal for themselves as they would for company and those who just eat a piece or fruit or microwave a meal. I think I fall some where in the middle. While I am married, and thus rarely eat dinner alone anymore, I only work part time and often have make myself a lunch when I am home during the day. Some times it is leftovers from the previous day’s dinner augmented by something that only I enjoy (like deviled eggs) but sometimes I make something fresh just for me. One of my favorite things to make is a baked potato and top it with enough things that it becomes a meal unto itself. Carmelizing onions and artichoke hearts only takes minutes and it makes a simple baked potato feel like a full meal.