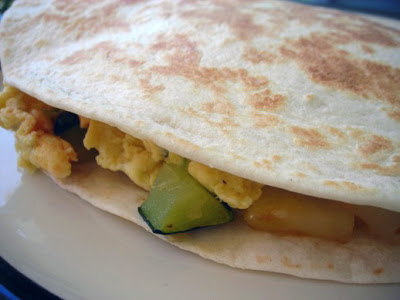 Directions:
Whisk together the eggs and the hot pepper. Scramble in a small pan, leaving large curds. Set aside. Meanwhile, in a small heavy pan, saute the onions, potato and zucchini together in the olive oil. Cover for a few minutes if needed to soften the potatoes and zucchini, then uncover and continue to saute until the potatoes are soft enough to eat. Heat a pan large enough for a large tortilla to lay flat. Place one tortilla in the pan and heat until warmed through and slightly browned, flipping once. Repeat. Remove from heat. Sprinkle the cheese on one half of the tortilla. Top with eggs, then a bit of salsa, then the potato mixture, then a sprinkle of cheese. Fold the plain half over to form a half moon. Cook until the cheese has melted, flipping it once, and the both sides are slightly browned, about 1-2 minutes. Remove to a plate and cut in half. Serve immediately.

When my husband lived in Austin, TX (before he moved to the greatest city in America and met me, a period I like to think of as the dark ages) he often had something that is rather foreign to most breakfast sandwich eating East Coasters: the breakfast burrito. The idea of a breakfast burrito seemed a bit much to me and their close cousin, the breakfast taco, too unsubstantial. Then I was flipping though Isabel’s Cantina: Bold Latin Flavors from the New California Kitchen by Isabel Cruz and came across a very simple recipe for breakfast quesadillas. Smaller than a burrito, but larger than a taco, it seemed perfect. Her recipe called for not much beyond salsa, eggs and a sprinkle of cheese, but it provided the inspiration I need to create my own more complex (and dare I say more tasty) breakfast quesadilla recipe. I created a quesadilla that that incorporated the potatoes Matt liked from his breakfast burrito days and homegrown zucchini and peppers. I think it would also be good with some spinach or sauteed mushrooms but I only used what is in season right now.

Speaking of my husband, he’s on a quest to bring back the cocktail hour with his new blog, Five O’Clock Shakes.