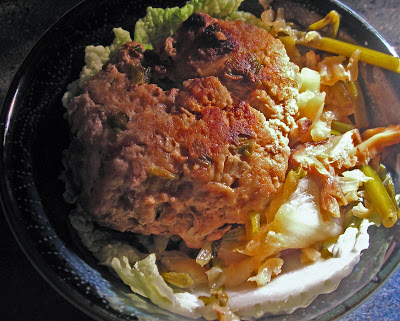 In a small pot, bring the broth to a boil then remove from heat. Soak mushrooms in the hot broth until soft. Remove the mushrooms from the pot. Slice and set aside, reserving the broth.

Meanwhile, in a large bowl mix together pork, scallions,pepper, bok choy whites, half of the rice wine, sesame oil, half of the ginger and half of the soy sauce,. Form into 4 patties. Heat a small amount of oil in a skillet and cook the patties for about 5 minutes on each side.

Remove and reserve 4 large cabbage leaves. Place the cabbage (whole) lengthwise on the cutting board and slice thinly from point to base and pull apart the pieces to shred. Toss with bok choy and garlic chives.

Add some canola oil and a drop or two of the sesame oil to a large pot and heat, Stir-fry the mushrooms, half of the cabbage mixture, and the rest of the ginger, and the remaining rice wine and soy sauce until the cabbage begins to wilt, 1-2 minutes. Add remaining cabbage stir-fry until all of cabbage has begun to wilt, about 3 minutes. Add the broth. Arrange the patties in a single layer and then cover with the reserved leaves. Cover and simmer 20 minutes, then remove the cover and cook an additional 10-15 minutes. Serve with rice.

I’ve always loved lion’s head but it isn’t always on the menu. I decided to make my own version which is fairly close to what I’ve had out but with some of my own touches. Typically the meatballs have water chestnuts in them. Something about the texture of water chestnuts is really off putting to me, but I really wanted to maintain some crunch (for texture interest) so I finely diced some of the crunchy bottom of a stalk of bok choy and used that instead. Still a touch of crunch but without the icky texture. I also added garlic chives and the rest of the head of the bok choy to the cabbage. You could also choose to make smaller meatballs, I made four so it was easily divisible: one for each of us for dinner, then the other two were divided up for our lunches. It was really, realy good.