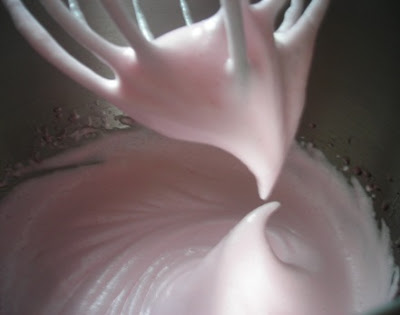 Directions:
Beat the egg whites and salt to soft peaks using an electric mixer. Meanwhile, in a medium saucepan, bring sugar, rhubarb and water to a boil, stirring occasionally. Continue to boil until it reaches soft ball stage (when a drop of the syrup forms a soft ball when dropped in cool water)while continuing to stir occasionally. Strain and discard the rhubarb. Keep the mixer running (you need a stand mixer or a friend to complete this next step) while you pour a continues stream of the molten syrup into the egg whites. Continue to beat for about 5 minutes, adding vanilla after about two minutes, or until the frosting is fluffy, glossy and cool. Frost cooled cupcakes or cake.

*If your rhubarb isn’t very red, you can add a drop or two of red food coloring to color the icing if you’d like pink frosting. Very red rhubarb will yield pink frosting without dye.

This recipe seems daunting; egg whites and a simple syrup combine to make a superbly fluffy, delicious and beautiful frosting but it is actually quite easy, especially if you have a stand mixer. The rhubarb flavor is subtle, but very much a part of the frosting. I got the idea from making rhubarb soda last year which also uses a rhubarb flavored simple syrup. I couldn’t see why using flavored syrup in my favorite marshmallow-y icing recipe wouldn’t work so I did some experimentation and it was fine. Just make sure to thoroughly strain out the rhubarb using a fine mesh strainer and work quickly. I bet it would work with other flavored simple syrups as well. Great on Baby Loves Rhubarb Cupcakes.