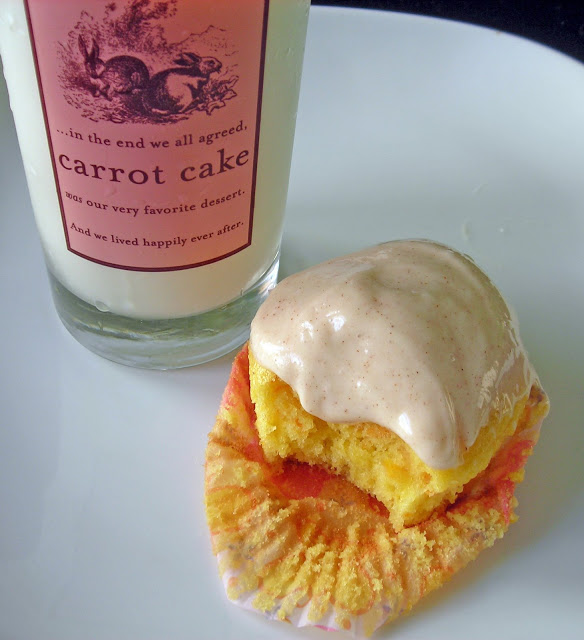 Directions:
Preheat oven to 350. Line or grease and flour 6 wells in a cupcake pan. In a large bowl, mix all ingredients together until a relatively smooth batter forms. Fill each well 2/3 of the way full. Bake 12-15 minutes or until a toothpick inserted the center of a cupcake comes out clean or with just one or two dry crumbs. Cool briefly in the pan, then remove cupcakes to wire racks to cool completely before icing with cinnamon cream cheese frosting. 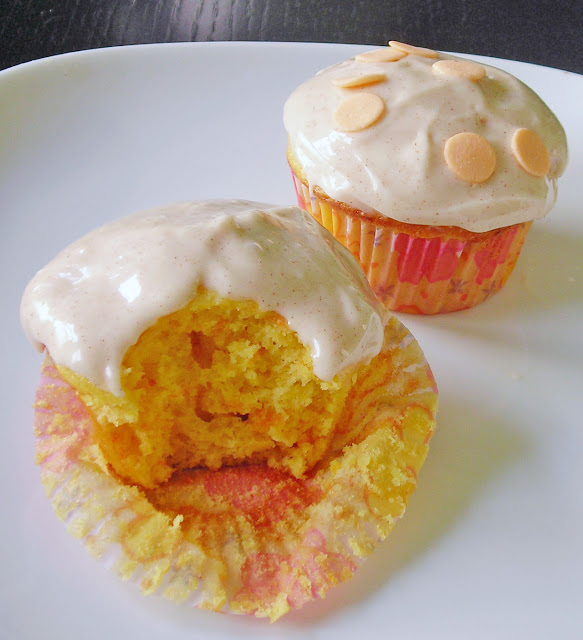 Until I made these, I am not entirely sure I had ever had more than a bite or two of carrot cake before, much less made it. It really wasn’t something that appealed to me until I was reading a now forgotten novel in which the character ate carrot-ginger cupcakes with cinnamon cream cheese icing. There wasn’t a recipe but the cupcakes sounded like a perfect idea to me, I have made carrot ginger cornmeal muffins before and a carrot ginger bread was one of the very first recipes I posted here back in 2004, but never a full-on carrot cake.

Carrot cakes are frequently made with oil instead of butter. I think it is because carrot cake was so popular in the US during the ’70s when oil-based cakes were still very popular due a relatively new technique* and a renewed interest in “health food” left people feeling virtuous when eating carrot cake (no butter! lots of carrots!) although it is generally not any healthier than any other cake, especially when iced with its classic accompaniment, cream cheese frosting. Oil cakes are also quite easy to put together and there was a surge of “quick and easy” cookbooks at that time. Since this isn’t a classic chiffon cake, all of the ingredients can be mixed together at once to great result and you don’t have to wait until the butter softens. Older recipes (and frequently in British recipes, where carrot cakes were popular during the war due to rationing) often call for butter. For this recipe I decided to go the swinging ’70s American route if for no other reason than the weather is very, very hot and my butter has been going from hard as a rock to completely melted in very little time.

I used canola oil because it a healthier choice than the more traditional vegetable oil and I think it is more neutral tasting. Using fresh and powdered ginger made the cupcakes spicy but not overpoweringly so. Unlike some carrot cakes, these cupcakes have a fine crumb and a very light and fluffy texture. 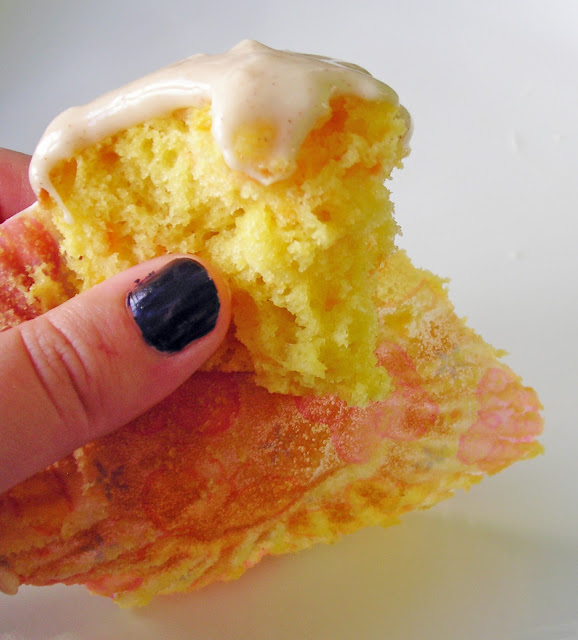 *The aptly named Harry Baker, creator of the prototypical oil-based cake he called chiffon cake, came up this technique back in the 1920s. However, wasn’t until the late ’40s and he revealed his secret ingredient (and sold the idea) to Betty Crocker that people began making cakes using oil instead of butter in any great numbers in the United States. Oil, even when used outside of the traditional chiffon cake which is made with lots of egg whites, gives cakes a fluffy texture. People who prefer cake mix cakes, which have a light, even texture and are frequently made with oil, often find oil based homemade cakes preferable to traditional creamed butter cakes because the texture is closer to that of a mix.