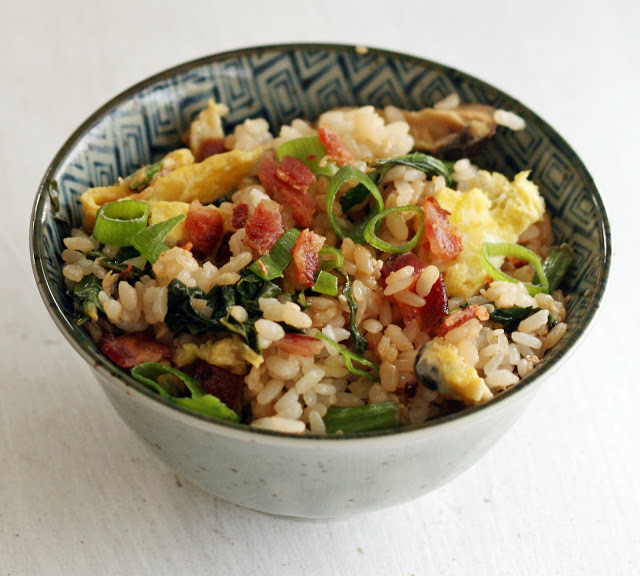 Directions:
For the rice:
Make the rice according to package instructions but adding a couple drops of sesame oil and some sesame seeds to the water. This time I used the liquid leftover from rehydrating the mushrooms for the omelet for a little extra flavor instead of water.

For the omelet:
Cover dried mushrooms with hot water for 20 minutes, then squeeze the liquid out and cut into thin strips. In a small bowl, beat eggs with the sesame oil and the green onions. Cook like an omelet in a large hot skillet, tilting to spread the egg mixture across the surface of the pan, about 2 minutes. When the top of the omelet is almost set, flip the omelet and cook for 1 minute on the other side. Remove to a plate and roll the omelet into a tight coil then slice it into thin, even strips. It should then uncoil, leaving you with long strips of egg.

Meanwhile: Fry the bacon in a large skillet. Drain onto paper towel-lined plates then cut into small pieces. Set aside.

*I like Koshi rice which is really tasty Japanese variety called Koshihikari grown here in the US, but any good quality sushi rice will do.

This recipe grew out of Matt’s memory of an high school friend mentioning that she would eat bacon rice for breakfast. At the time he thought it was odd but once he told me about it, we realized that it actually sounded kind of good. We weren’t entirely sure what was in it so we came up with this, a sort of pan-Asian un-fried rice. The very few mentions of bacon rice I could found after we made if for the first time were mostly for Japanese American homestyle bacon fried rice or of visits to “bacsilog” -bacon, egg & garlic fried rice- stalls in the Philippines. Frankly, I am not sure if fried rice is quite what I want to start my day off with. My version is slightly more dressed up and I bet, a bit fresher tasting. Despite the bacon, this recipe yields a decidedly non greasy meal, especially if you use thick, center cut bacon which generally is high in flavor but lower in fat and then thoroughly drain the slices.

Another pro in the un-fried column is that despite our 3x+ a week consumption of sushi rice, I almost never have leftover rice. Making the rice the day I actually want to eat it, rather than having to think ahead and make it the day before so I can make fried rice, is much easier and by the time the rice is done, all of the other components should be ready.

While we eat this more often than I’d care to admit, I never thought I’d post the recipe. Bacon rice what we make when I am too tired to come up with something new and/or am tired of photographing everything that comes out of the kitchen. It’s made up entirely of ingredients we pretty much always have on hand and is really quick to put together. Despite its undisputed deliciousness, I wasn’t sure if anyone would be interested in an actual recipe. I changed my mind after mentioning making it a couple times on Twitter and I was overwhelmed with recipe requests. I guess I shouldn’t have been surprised, bacon is always a hit!

So here it is. Written out it looks a little complicated but it really just a bunch of little steps that can pretty much be completed at the same time for a meal that takes approximately 30 minutes to make. We like to have it as a weeknight dinner or for a weekend breakfast/brunch before heading out to a busy day. Consider yourself forwarded, once you make it for the first time you will want to make it again and again.

A few notes:
I like to make it with some vegetables because it makes the dish into more of a complete meal but if you are in a hurry or want to serve this for breakfast (and are vegetable adverse in the AM) you can leave them out.

You can also vary the vegetables. I love Chinese broccoli so I used that but it is also tasty made with other leafy greens like baby bok choy, Shanghai cabbage. tatsoi or even spinach, prepared in the same way.

Other variations: Add some chopped shrimp to the omelet. Add some cubed tofu or fresh mushrooms to the vegetable mix. Using the kecap manis (a palm sugar-sweetened soy sauce) will give you a sort of sweet-smoky-salty bacon rice that is an interesting variation on what we typically make.