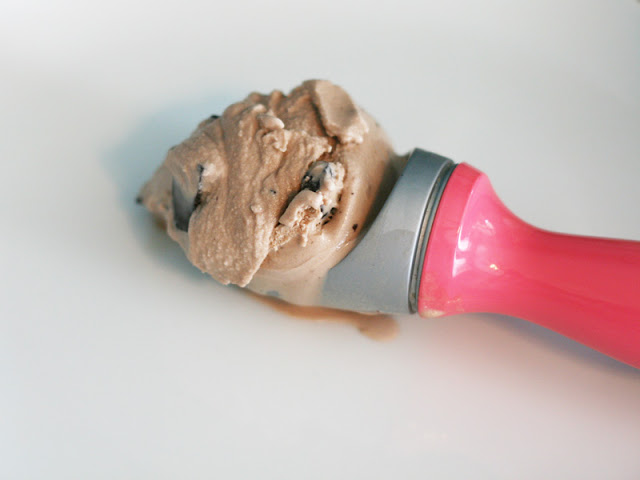 Directions:
In a heavy saucepan over medium heat, whisk together half of the sugar (1/8 of a cup equals 2 tablespoons) and all of the milk and cream until the sugar dissolves and the mixture almost boils, about 2-3 minutes. Meanwhile, whisk together the remaining sugar and the egg yolks until it is yellow and creamy, about 2 minutes. Add about a 1/4 cup of the cream mixture into the eggs and whisk to combine. Pour the egg/cream mixture it into the cream mixture on the stove. Whisk in Ovaltine, vanilla and a pinch of sea salt and cook, stirring occasionally, for about 8 minutes or until the mixture coats the back of a spoon. Remove from heat and then strain the mixture into a bowl. Allow to cool on the counter then cover and place in the refrigerator to cool completely. Remove from the refrigerator and stir in the chocolate bits. Pour into a ice cream maker and churn until cold and set. Place in a freeze-safe container and freeze until solid. 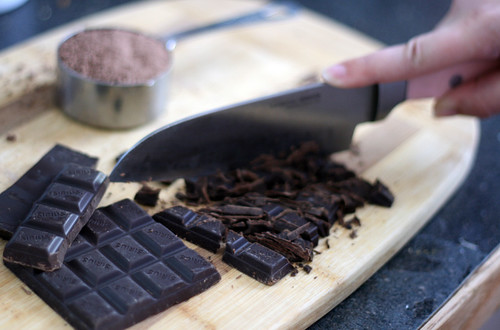 *I chopped up part of a 70% Extra-bitter Sirius Pure Icelandic Chocolate bar I found at Whole Foods to give the ice cream a “grown up” edge but a slightly less dark bar could also be used.

Ovaltine is a vitamin-fortified chocolate malt powder than you stir into milk. I’ve heard it is more popular overseas than it is here in the US where it has taken on a serious retro feel since it hit its peak in popularity during the 1930s. It really a shame it isn’t more popular, it is quite tasty and has more vitamins and minerals than other chocolate drink mixes. In fact, it was created in Switzerland originally as a health drink for children.

You can make Ovaltine hot or cold milk but Matt, the Ovaltine drinker in our household, likes it cold best and has been suggesting that I make it into ice cream. I’ve never come across any recipes for Ovaltine ice cream so I had to do some experimenting but it was worth it. The ice cream is rich and chocolatey with just the right amount of malt and the chocolate chunks keep it from becoming too sweet. 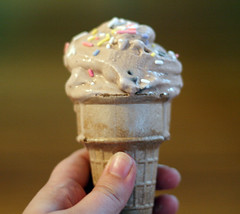 A quick note:
Ovaltine can be a little tricky to find here in the US but most well stocked grocery stores have it either in the coffee and tea isle or in a “British foods” section. It is also often sold at Asian or South American grocery stores. There are some differences in the formulation depending on what region’s Ovaltine you are buying but they shouldn’t make a difference in this recipe.