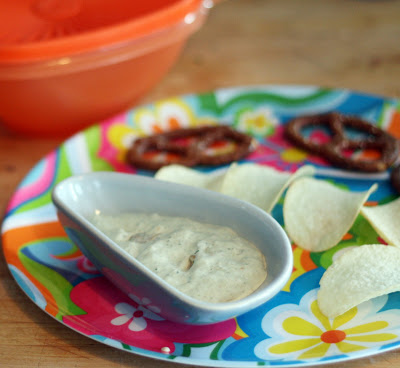 Easy variation: for more clam flavor add about 3 oz of clams to the mixture when you food process it then stir in the 10 oz of clams.

What ’60s night would be complete without some sort of chip & dip? While clam dip wasn’t exactly invented during the 1960s but that was the decade when it was in its pre-Julia Child “company food” heyday. Dip really became popular in the 1950s after the invention of California Dip which was then made even easier with the introduction of Lipton’s instant onion soup mix and as the years went on, other flavors of dips became party staples. A recipe for clam dip appeared in almost every 1960s cookbook I came across.

Best served with Pringles (introduced in the US in 1968), crisp vegetables and crackers, this dip is creamy and (this version at least) has a great tangy savory flavor. I was a little skeptical about using canned clams but they were juicy and flavorful and added texture interest.