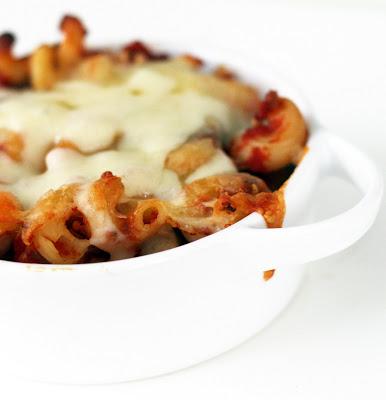 Directions:
Preheat oven to 350. Meanwhile, cook the pasta until almost al dente. Drain and set aside. Place the eggplant into colander. Sprinkle with salt. Allow to sit and drain for about 10 minutes then rinse it off thoroughly. In a large pot, heat the oil. Add the onion, pepper and garlic. Saute over low heat until the onion is soft. Add the eggplant and saute for 2 minutes. Add the tomatoes and spices. Cook until most of the liquid has evaporated, stirring occasionally, about 15 minutes. Stir into the pasta. Pour the mixture into a 13×9 baking dish. Sprinkle with a layer of mozzarella and Parmesan. Bake for 20 minutes or until hot and bubbly.

Note: It is important to salt the eggplant and make sure the liquid in the sauce is mostly evaporated or the dish will be unappetizingly wet and soggy; eggplant gives off a lot of liquid. Resist the temptation to skip either of these steps.

This one of those “more than the sum of its parts” recipes. I thought it would be good (frankly, I was just happy to use up this enormous eggplant I had) but it turned out to be so great I had to share it with you. The simmering and baking of the eggplant made it velvety smooth and silky creamy without even a hint of bitterness or stringy texture. It was like a whole new vegetable. The cubanelle pepper added a fresh tasting yet subtle spice that worked well with the red onion and tomatoes. I am honestly contemplating never making a red sauce without cubanelle peppers again. Reducing the sauce really concentrated the flavor and took it to a level of deliciousness not always found in baked pasta dishes where people often look for meat or cheese for flavor. I didn’t want to leave cheese completely behind but it only needed a light sprinkling to bump it over the top and towards pasta bake perfection.

After eating this I realized one could sort of think of it as a healthier version of eggplant Parmesan, the eggplant isn’t breaded and fried but there is that wonderful mix of eggplant, sauce and cheese that is so comforting. This time of year, who couldn’t use a cozy new dish to add to their repertoire?