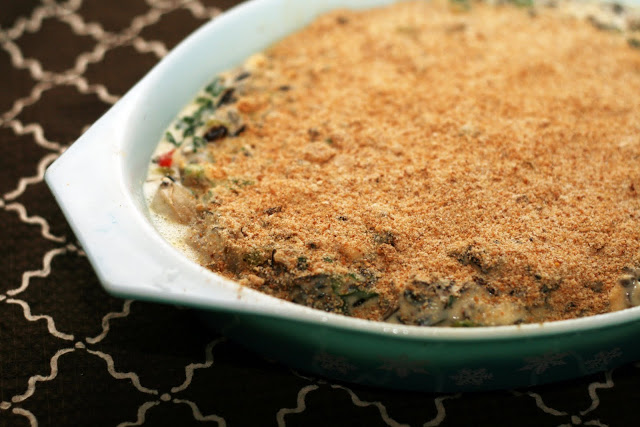 Grease a  1 1/2 quart casserole. Melt 2 tablespoons of butter in a skillet. Saute the shallot and peppers until fragrant. Add the oysters and saute for 5 minutes. Melt the remaining butter in a small pot. Whisk in the flour. Add the evaporated milk and a few tablespoons of the oyster liquor. Whisk until the milk is near boiling and the mixture thickens. Stir in the cheese. After the cheese melts, stir in the bacon, rice, spices and spinach. Stir in the oyster/pepper mixture. Pour the mixture into the prepared dish. Sprinkle with bread crumbs. Broil or bake at 350 until bubbly and browned. 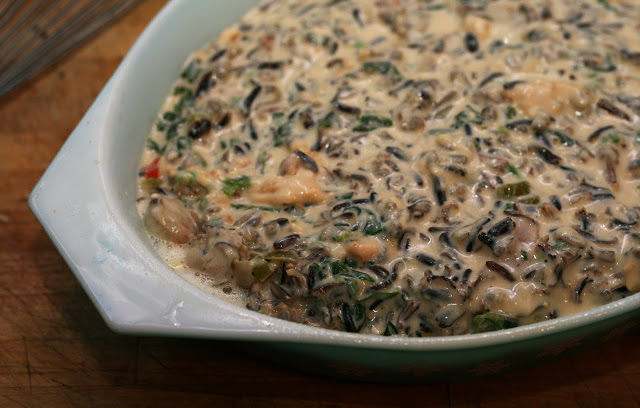 Tips: Cook the bacon and make the rice the night before. While I like using evaporated milk because it is very creamy but low in fat, regular milk could be substituted.

I don’t have much of a casserole background. We just didn’t eat them (save mac and cheese if that counts) growing up. However, I occasionally hear of one that intrigues me. I came across a mention of oyster casserole and it sounded good but 1. seemed too plain (mostly just oysters, sauce and cracker crumbs) or 2. included cream of whatever soup which I’ve never had and sounds slightly gross. So I thought I’d make one I’d enjoy. Adding the wild rice and extra veg turn it from a side dish to a main dish that can be a meal on its own.