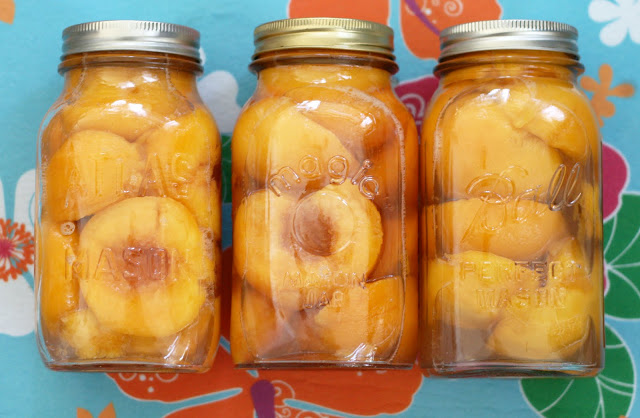 Directions:
Prep 4 quart jars.  If you’d like, float the peach halves in water mixed with Fruit Fresh or lemon juice, to help retain their color after peeling and slicing. Then pack them into the jars. Meanwhile, bring the sugar, vanilla beans and water to a rolling boil. Do not let it reduce. Pour the hot syrup into the jars, leaving 1/2 inch headspace. Run a knife or a jar scraper to dislodge any bubbles while turning the jar slightly. Seal. Process in a hot water bath for 30 minutes.

Note: A great source for canning information is the Blue Book guide to preserving. I highly recommend it for learning how to can. Here is a bunch of other canning books and equipment I find useful.

Last year my mom gave me a ton of old canning jars she had collected from various friends who were no longer canning. Most of them were pretty standard but a few were more unusual (to me anyway) especially in the quart size. I don’t can much in quart sized jars (they’re huge!) so I haven’t used most of them. Last year I had wanted to can peach halves but peaches just were not very good last year; all watery and flavorless. Then this year it was iffy or downright awful weather pretty much any day we wanted to go to the pick-your-own farm so I didn’t think I’d be able to get it done this year either. Then my box from Sweet Preservation showed up and it was full of large, juicy, delicious peaches! Peaches are Matt’s favorite (I think he eats more than a bushel a summer all by himself, no exaggeration) and I thought it would be great preserve the last gasp of summer for the winter months. I made a light syrup infused with vanilla beans because I think peaches and vanilla are a wonderful combination and heavy syrup is just too sweet and well, syrupy. This is very light and I think the leftover syrup from the opened jars will be great in drinks or drizzled over yogurt.

To get back to my old canning jar anecdote, I dug out some quart jars to use and ended up using a square Ball jar with a really old (pre-1933? there isn’t a swoop under “Ball”) logo, a jar stamped “Magic Mason Jar”, a fun Atlas jar and a Laurens “Longlife”. Of course it really doesn’t matter what the jars like but it is fun to think of all the other things that have been canned in them and they look pretty in my canning cabinet.