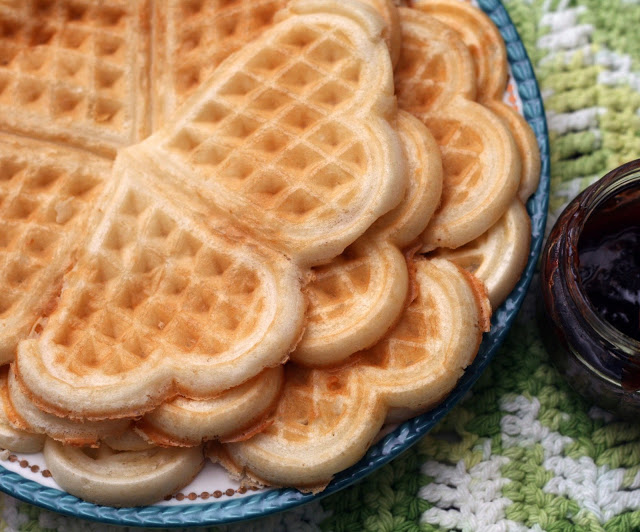 Directions:
Prep your waffle iron according to manufacturer instructions.

When we got married we didn’t have a wedding but my in-laws did throw us a party about a month later and invited all their friends and relatives. We hadn’t registered anywhere but were told to just in case someone wanted to get us a present. We put this Villaware waffle iron on the list because it made heart-shaped waffles (what better excuse than getting married to ask for such a thing?) and used it a number of times but the waffles it makes are rather thin and we ended up buying a Belgian-style waffle maker that we use most often. Most American recipes seem to make big, fluffy waffles and they just work better in the Belgian-style waffler. The heart-shaped waffle iron was super cute, well-made and made great waffles so I always felt bad not using it more often. Well, as part of the journey through exploring Swedish food I put myself on, I came to realize that my skinny-waffle-making waffler was very, very similar (if not the same!) as the waffle irons that make Scandinavian-style waffles. Then I read about Våffeldagen, Swedish waffle day and the story behind the waffle eating* and finally had my excuse to break out my waffle iron once again. I found a lot of references to using Vichy water or other sparkling water in Swedish pancakes and since we have a Soda Stream, I thought I’d give it a shot. It makes a thin, light batter, perfect for the thin, light waffles I was hoping for. They had the perfect crispy outside and moist interiors. One note: do not stack these to keep warm, the bottoms do tend to get soggy. Instead, stick them directly on the rack in a cool or very low (200) oven in a single layer until ready to eat.

*Vårfrudagen or Annunciation is on March 25th. Vårfrudagen sounds like Våffeldagen when spoken aloud so it became a rather quirky tradition to eat waffles on this date each year in Sweden, home of many interesting food traditions.