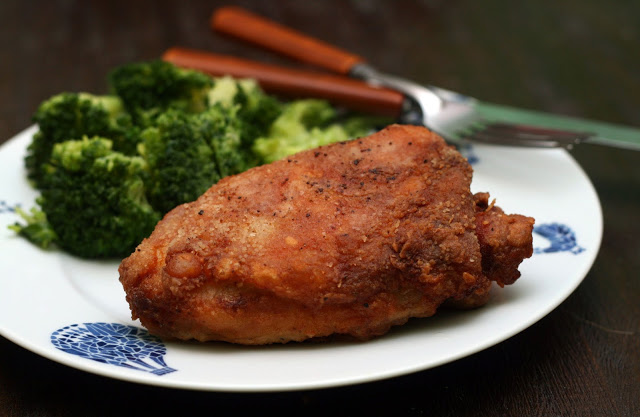 Directions:
Place the milk and the flour in seperate shallow bowls. Add salt and pepper to the flour to taste. Dip the chicken in the milk then in the flour mixture. Place on a platter. Set aside.

Did you know that Maryland has its own style of fried chicken? No? Neither do most people, including ones that live here. It seems to have all but died out and it is a shame. Luckily it is easy to make at home. The major differences between Maryland fried chicken and Southern style fried chicken is that the chicken isn’t heavily breaded, it is pan-fried (not deep fried) and it is covered for part of the cooking time to almost steam the meat cooked.

This is very similar to the way my Grandpop always made chicken. I didn’t realize until I was older and did more food history reading that it wasn’t just something he did, but an actual thing (much like meat cakes) that other people made. He only made it with thighs so that is how I made it here. I guess you could use other pieces of chicken, but I think the thighs cook up the best: crispy and evenly, while angular breasts and bumpy legs are a bit more difficult to achieve good, brown crispy skin via pan-frying. The “steaming” time results in super moist chicken under that crisp shell. So good! Better, perhaps, than what you can achieve frying Southern-style when it is more difficult to tell when the chicken is fully cooked resulting in either under or over-cooked chicken.

Note: This is not be confused with some old recipes for “Chicken Maryland” which call for bananas. Bananas! Baltimore once was a major import spot for bananas so I guess it makes sense but it is an odd recipe most often found overseas.