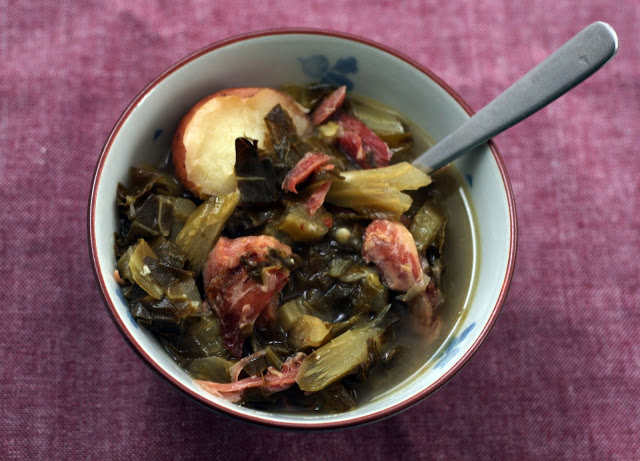 In a large (at least 8 quart) pot, heat the oil. Saute the onions, garlic, and bay leaves until the onions are soft but not browned, about 10 minutes. Add the broth, vinegar, turkey legs, salt, pepper, pepper flakes. Bring to a boil, skimming off anything that rises to the surface. Reduce heat and simmer 1 hour. Remove the turkey legs and pick off all of the meat. Reserve the meat, discard the bones.

Add the greens, return to a boil. Stir so all of the greens are coated in broth and starting to wilt. Reduce heat, add the turkey meat back in and the potatoes. Cook for 1 hour or until the potatoes are fork-tender.

*I buy mine pre-shedded. If this is unavailable to you, cut them into 1/4 inch wide strips, spine (ribs) and all.

Yield: approximately 10 servings. Extras freeze well. (Honestly! I made this and wrote up the post a couple of weeks ago and just had some for dinner yesterday–I just put the frozen greens in a pan and simmered until warmed through. Tasted the same as the day I made them.)

We made these greens the other day and when I Instagramed it, someone asked for a recipe. I directed her to an earlier recipe I had made and then realized that I had made so many changes to it (different greens, different seasonings etc) that it really only made sense to post a new recipe showing what we did. Plus that recipe was from July 2008, if you can believe it, so it seemed way overdue for a makeover. We still use smoked turkey legs instead of the more traditional ham hock because they are meatier and I think easier to deal with than hocks. I always would get some bit of bone in my greens (somehow! I am the princess and the pea but with bones and rocks when it comes to food) when I use ham hocks but never with turkey legs. Plus turkey legs (perhaps oddly?) seem easier to find here in Baltimore than ham hocks. We just pick out the meatiest ones we can find. Sometimes they are so meaty, you can serve these greens and have a complete meal. I also love using turnip greens but since I found pre-shredded collards, I’ve made the switch. It is just so much easier, especially if you are making a bunch of other foods to serve with the greens. No more removing the spine (ribs), chopping and washing repeatedly in the salad spinner to remove the grit. We just boil the meat, remove it, dump in the greens then the meat and potatoes and we are done. Only about 5-10 minutes hands-on time to pick the meat off the bone and chop the onion. Super satisfying. I love to serve it with my favorite catfish or Maryland Style Fried Chicken but it really goes with anything.