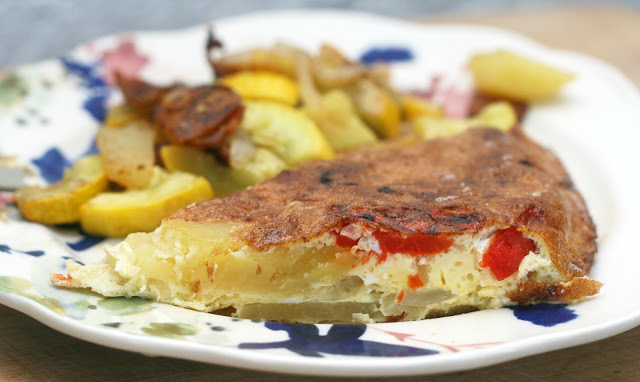 Directions:
Drain and chop the pepper. Set aside.

Carefully pour the hot oil into a heat-safe bowl (I used a 4-cup Pyrex measuring cup). Allow to cool, then discard.

Pour the beaten eggs over the potato mixture,  and shake the bowl to distribute the egg. Pour the mixture into the (still well greased) pan. Smooth out the top of the omelette if needed. Cook, for about 15-20 minutes until just set. Flip the omelette on to a plate as if you were inverting a cake on to a baking rack or platter* then slide the raw part of the omelette back into the pan to brown 1-3 minutes. Remove to a platter. Allow to cool 2 minutes before slicing. Serve hot, cold or at room temperature.

*I found this visual example of flipping the tortilla here.

Tortilla de Patatas is one of my favorite things to order when we get tapas. We had a particularly good one in London of all places and it has been in the back of my mind ever since to make one myself. Flipping it is somewhat harrowing but it does give a great browned crust on both sides. If you don’t feel up to browning it, use an oven-safe skillet and finish it off in the oven as you would it’s Italian cousin the frittata.

Apparently, even the use of onions in Tortilla de Patatas is a bit of a debate among cooks so I’m sure peppers might be met with some skepticism as well but they are both so great in this I don’t care. It not only was very tasty but it is a fairly quick dish to make when you don’t have much in the house beyond the basics.