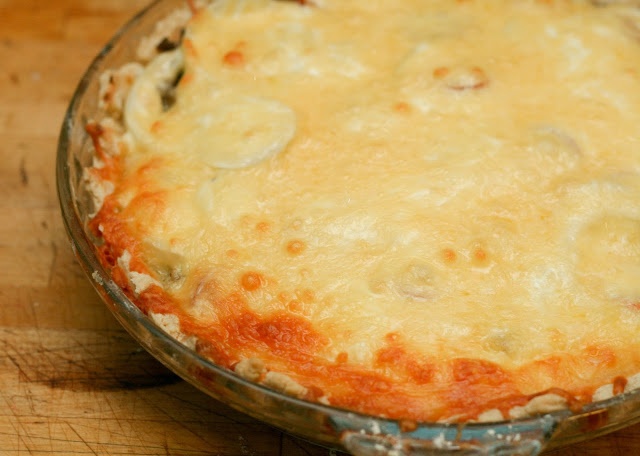 for the pie crust:

for the topping:
1 2/3 cup crème fraîche (or sour cream thinned with a bit of milk)
5 oz shredded quesadilla cheese or cheddar

In the bowl of a stand mixer, using the paddle attachment, beat together the butter, flour, and paprika until the butter just tiny chunks and the mixture looks shaggy, like rocky sand. Slowly stream in the water and mix until a thick dough forms. Roll out the dough on a floured surface. Place in a standard pie plate. Prick with the tines of a fork and bake 10 minutes. Set aside.

In a large skillet, saute the ground beef and spices. Saute, breaking up any chunks of meat with a spoon, until nearly fully cooked. Add the water and simmer until the water has evaporated.

Pour the meat into the prepared pie shell. Top with onion rings and tomato halves. Spread the Crème fraîche on top of the pie. Sprinkle with cheese. Bake 20 minutes or until bubbly and lightly browned. Serve with tortilla chips to scoop loose filling.

Note: Feel free to use my homemade taco seasoning mix in this recipe.

I’ve been looking for an excuse to make tacopaj ever since I first came across a picture of it on instagram. A product of a push of Tex-Mex spice mixes in Sweden, it is another American Tex-Mex international crossover. After the success of Takoraisu, I felt bold enough to make it myself. It was pretty easy to make if slightly time consuming thanks to having to make a pie crust. It was a bit tricky creating the recipe, the majority are in Swedish and while my food Swedish is actually pretty good, I looked at dozens of recipes to create the most authentic tacopaj I could using American measurements. I saw a few variations: some had corn, some had sliced whole tomatoes, some had tomatoes in the meat but this one seems closest to what I saw on menus and in Swedish food magazines. The only thing is that they all called for “shredded cheese” but no recipe said what kind of cheese. I used quesadilla cheese because I had it but cheddar would be a good option too. The end result is surprisingly good, it is sort of like a cross between quiche (without eggs) and taco dip I guess? According to my research, one serves it with tortilla chips which is an excellent idea because while it was somehow sliceable without any sort of binding agent, it is a bit crumbly once you start eating so you can use the chips to scoop up errant meat.