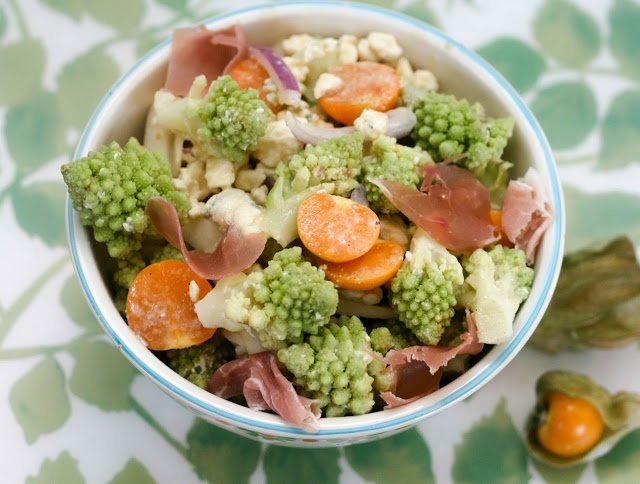 In a small bowl, whisk together the dressing ingredients. Drizzle over the vegetables, toss to coat. 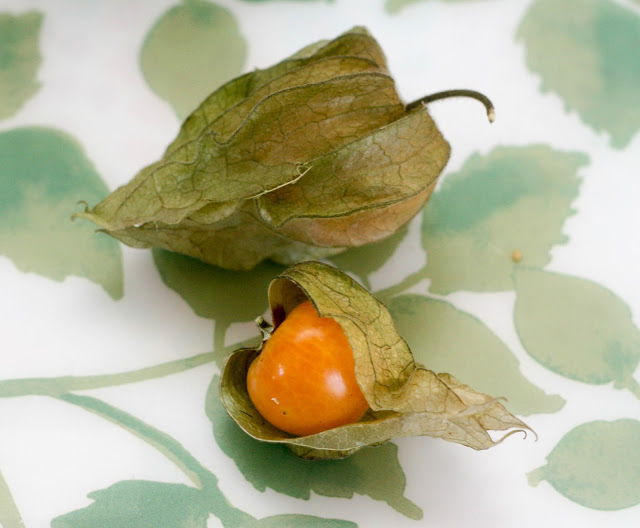 *I bought these at Wegmans for a surprisingly affordable $2.49/pint (3 oz). They were labeled as “goldenberries” and were sold under the Melissa’s produce label. I’ve also seen them in farmers markets as “ground cherries”, they look like yellow cherry tomatoes and are in a husk like tomatillos. To me, they taste a bit like kiwi.

This dish takes its inspiration from the popular broccoli salad that is such a crowd pleaser at get-togethers. Since Thanksgiving is this week, I thought I’d fancy it up a bit. I used broccoli cousin romanesco (in season now) instead of broccoli, ground cherries instead of dried cranberries–they have a similar sweet-tart flavor profile, blue cheese because it had to stand up to the strong flavors and in-season Spanish black radish (regular red radish would do in a pinch) for crunch, and Prosciutto instead of bacon. Romesco has a nice crisp flavor and firm texture and looks like a punk rock cross between broccoli and cauliflower. It holds up really well in cold salads. This salad is a bit sharp and pungent tasting but not bitter–one of my favorite attributes in a salad. The perfect contrast to the buttery, creamy, cheesy dishes that grace the holiday table. Bonus: it can be dressed and ready to go hours before serving.