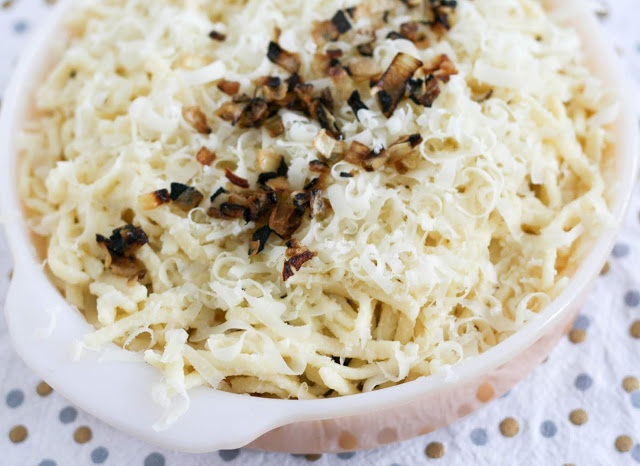 Directions:
In a large pan, caramelize the onions in butter until golden. Cool.

Grease an 8-inch round pan. Layer 1/3 of the spätzle in the bottom. Top with 1/2 of the cheese and 1/3 of the onions. Repeat with remaining spätzle, cheese, and onion, ending in onion. Bake 15 minutes or until brown and bubbly. 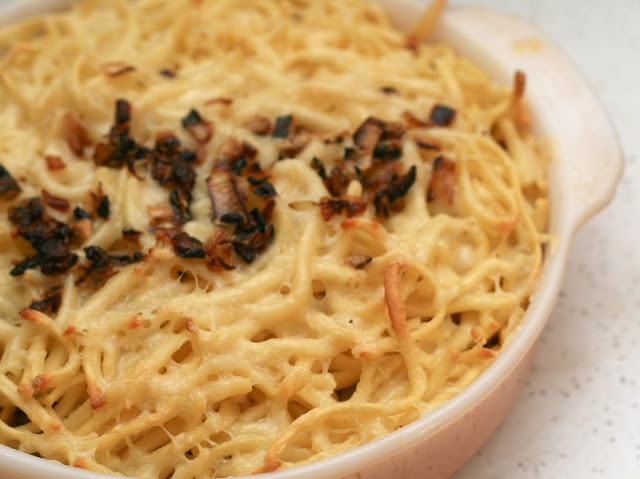 I’ve been wanting to make the Austrian dish käsespätzle for a while but Emmenthaler cheese is a bit expensive so I kept putting it off. We went to the Baltimore German Christmas Market and had some great German food which reawakened my interest in German and Austrian food which has a fair amount of overlap. It is always so hardy, I feel like it’s a good cuisine to explore when it is cold out.

I saw Emmenthaler cheese at Aldi for under $5, so I picked some up and finally made it. To make it easier to make on a weeknight (I also made schnitzel) I caramelized the onions the day before (they darkened up a bit overnight but I promise they were not burnt!) and assembled the whole dish in the morning so in the evening I just had to pop it in the oven. If you do this and are using a baking dish like this Fire King, make sure you set it out for a few minutes before baking so it doesn’t crack in the oven.

This dish is really satisfying. Its sort of like a more savory version of mac and cheese but oddly isn’t that heavy. I guess because there isn’t a heavy cheese sauce, just shredded cheese and caramelized onions. Totally worth the effort and a great side to have or even a main if you served it with a salad.  Feel free to put more onions on top, I went a little heavier inside the dish and chose just to have a sprinkle on top but you can layer the onions however you’d like.