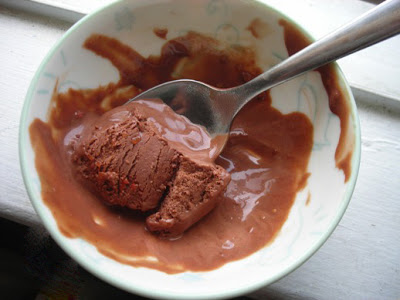 Directions:
In a small bowl, soak the goji berries in the cachaça. Set aside. Meanwhile, in a large pot over medium heat, whisk together 1/4 cup sugar, milk and cream until the sugar dissolves and the mixture almost boils, about 2-3 minutes. Meanwhile, whisk together 1/4 sugar and the egg yolks until it forms a ribbon and is yellow and creamy, about 2 minutes. Add about a 1/2 cup of the cream mixture into the eggs and whisk to combine. Pour the egg/cream mixture it into the cream mixture on the stove. Whisk in cocoa, vanilla paste and a pinch of sea salt and cook, stirring occasionally, for about 8 minutes or until the mixture coats the back of a spoon. Remove from heat and whisk in the chopped chocolate. Strain mixture into a bowl. Drain the goji berries and stir them in. Allow to cool on the counter then cover and place in the refrigerator to cool completely then pour into a ice cream maker and churn until cold and set. Place in a freeze-safe container and freeze until solid. Serve with a sprinkling of sea salt.

You all know how much I love the Vosges goji bar, right? Well, I started to wonder what would happen if I took those same favors and applied them to other types of food. I found goji berries while we were in New York and brought them home. I thought about making fudge or candies or brownies but couldn’t really decide which sounded best. I might still make them, but this morning it came to me: ice cream! I always think of ice cream as being tricky (custard making!) and time consuming, but it is actually quite easy (just stirring, basically) and the hands on time is short. The worst part is waiting for it cool and then freeze-I am so impatient. Anyway, I’ve only made ice cream a couple times before so I was a little nervous, what with all of the pricey ingredients I used and all but it is seriously the best ice cream I have ever had. Richly chocolate and creamy it would be delightful even without the plumped up goji berries, but they really push it over the edge. They are slightly tart and have sort of an herbal undertone that goes wonderfully with chocolate.