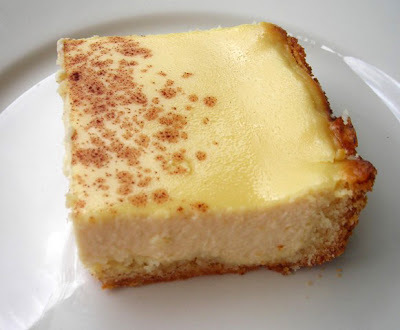 *Use brick cream cheese, not the spreadable kind that comes in tubs.

Directions:
Preheat oven to 325. In a large bowl, mix together all of the cake ingredients. It should look more like a dough than cake batter. Press into a 13×9 baking dish, covering the bottom and at least 1/2 the way up the sides. In another bowl, whisk together all of the filling ingredients until smooth. The batter will be quite thin. Pour over the cake and sprinkle with cinnamon. Bake for 60-70 minutes or until it looks set. It should not be browned, just sort of custard colored. Cool in the pan on a wire rack. Cut into squares and serve.

In the Pennsylvania Dutch community, smearcase is cottage cheese. In Baltimore, however, smearcase is the name of a particular sweet cake. It is a hold over from the days when the majority of the city was made up of German immigrants. It is one of those foods that seems to be unique to Baltimore, and I am sure it is probably an Americanization of some Germanic recipe. A handful of locally owned grocery stores and bakeries still make and sell it but beyond that, smearcase has all but vanished. I grew up eating it as a special treat (we rarely got anything from a bakery beyond the occasional doughnut) because it was one of my grandfather’s favorite cakes. The best way to describe it is that it is sort of a flat, not too sweet custardy variation of cheesecake that is sold in large, rectangular slabs and is always sprinkled with cinnamon. I have never seen a recipe for it, but then I was researching regional Baltimore foods online I came across a mention of smearcase that gave some hints as to what some of the ingredients might be. That, combined with a trip to Graul’s, a local grocery store and smearcase stronghold, where I was able to check out their ingredient list, I think I figured it out. I had guessed it must have a fair amount of cream cheese in it (I did wonder if there was a cottage cheese in there, but when I experimented with that it just didn’t have the right flavor) and the article mentioned evaporated milk. I made it easy on myself and just used 2 bricks of cream cheese and 1 can of the evaporated milk, rather than trying figure out complicated proportions and it worked. From past experience I thought the texture of the “cake” part seemed like it was oil based dough (dry crumb, not fluffy or cakey) and I knew it was sweetened, so I just made a basic cake batter but since the cake is on the dry side, left out any extra liquids. It tastes just like I remember it. I love making regional American food, especially those of my hometown of Baltimore. If we don’t keep making them, they will disappear forever. As a sidenote: really is a testament to my love for my 93 year old grandpop that I made him this on a day when the temperature loomed near 100. I hope he likes it! Matt liked it, he said it had sort of an old fashioned taste to it. I agree, it tastes like something you’d get in a luncheonette in 1930, very wholesome and comforting.