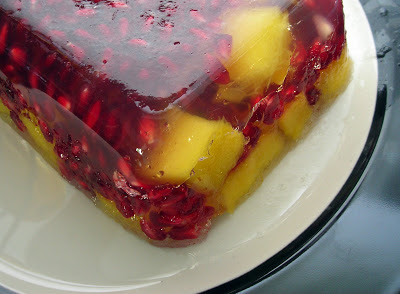 Direction:
In a large bowl, dissolve the gelatin in the lukewarm water. Set aside. Meanwhile, in a small pan, bring 1/4 cup water and the sugar to a slow boil, stirring to dissolve the sugar. Cool slightly then pour into the gelatin. Stir. Add the club soda, stir gently. Arrange the fruit in a loaf pan. Pour the liquid on top. Cover and refrigerate 3 hours or until firm. Run under warm water and invert onto a plate to unmold. 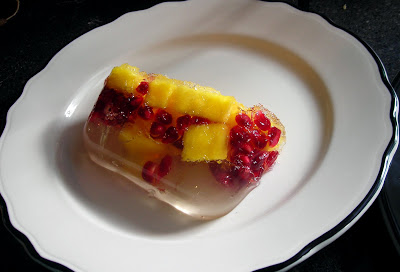 I’ve never participated in Donna Hay Day before but when I saw that this time the theme was terrines, I couldn’t resist. I had been planning on making a sparkling pomegranate gelatin once pomegranates came into season so I thought than instead of going the individual mold route, I’d make a loaf shaped terrine. I thought the pomegranate’s tartness would be tempered by the sweetness of mango(the fact that I have a whole case of mangos didn’t discourage the idea either) and terrines generally have multiple layers of flavors so decided to add a second fruit to the mix. Rather than make it with fruit juice like a lot of jelled terrines, I kept the flavors simple and just sweetened the liquid a bit. I love how it turned out. The club soda gave it an effervescent texture and the pomegranate pips exploded in your mouth with every bite. I liked it even better than the summery raspberry/blackberry/blueberry gelatin terrines I’ve made, the pomegranate seeds float so you get a more interesting fruit distribution then you do when everything is roughly the same weight/size. Gelatin terrines do seem a bit summery, but using more seasonal fruit takes it right into the colder weather. Plus it is a refreshing change from all of the heavy desserts that are abundant this time of year.