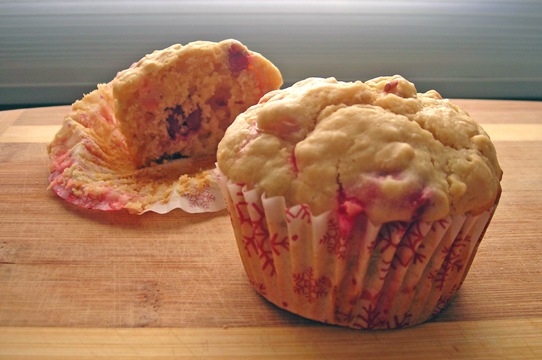 Directions:
Preheat oven to 350. Line or grease and flour one 12 well muffin tin. In a large bowl, mix together the oatmeal, egg, oil, milk, and sugar. After it is thoroughly mixed, add in the flour, salt, ginger, and baking soda. Stir to combine. Fold in the gooseberries. Divide evenly amount 12 muffin wells. Bake 15-20 minutes or until a toothpick inserted in the center of the center muffin comes out clean. Cool on a wire rack, serve.

*A lot of gooseberries sold in the US are actually unripe. Ripe gooseberries, which are a lot less tart, are reddish, while the unripened ones are green. I used a mixture of both for this recipe.

On my food wishlist on Food Maven, I mentioned that I was on the look out for gooseberries. I didn’t have have luck finding them at the farmers market this year and figured I’d have to wait a while and then try again. Then I got an email from Peter of the Cherry Hill Farm in Vermont. He said that they had planned to add a gooseberry jam to the list of preserves they make and sell but didn’t actually do it. As a result they had several pounds of frozen gooseberries they offered to send me. Of course I jumped at the chance and a few days later, a slightly sticky box arrived. Some were a bit worse for the wear but I was able to salvage some and make these muffins. The result-not to sweet not too tart berry muffins.