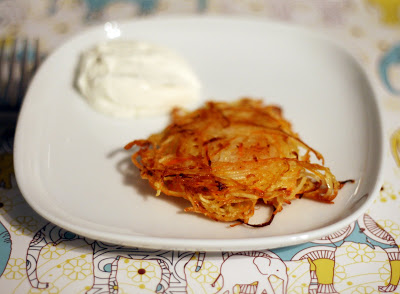 Directions:
In a large pan, heat about 1/4 inch oil. In a large bowl, combine the eggs and the matzo meal. Add potatoes, carrots and onion. Toss to combine. 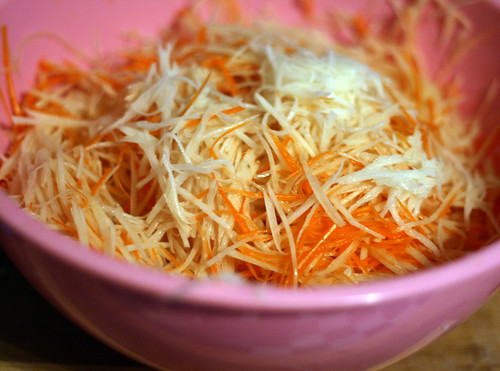 Yield: about a dozen latkes, depending on size.

For this year’s latkes I was excited to try out my new mandoline which made great, long, thin strips of the potato, carrot and onion much faster than traditional grating. I also thought that the latkes cooked through a little better than when I’ve grated potatoes with a box grater; none of the latkes had even the slightest bit of raw potato, something I’ve occasionally encountered in these types of potato latkes. That said, you don’t need a mandoline to make great latkes, a box (or other) grater works fine. A lot of people use a food processor to shred the potato but I personally think it chops the potato up a bit too much and the latkes sometimes become a little gluey as a result.

This Hanukkah I added carrot to the potato and really enjoyed it. It wasn’t much of a change texture-wise but it added a bit of sweetness to the potato. Plus it is always a good idea to sneak in a little extra vegetables on a holiday devoted to fried foods. Latkes are rather time consuming and I know we rarely bother to make another side dish when we have them.