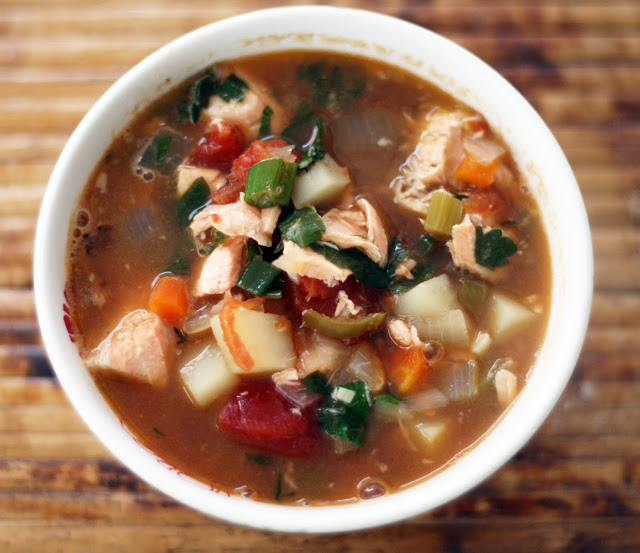 Directions:
Cook the bacon in a skillet until crisp. Drain on a paper towel lined plate. Crumble the bacon and set aside. In a large pot, saute the onion, shallot, garlic, pepper, potatoes, celery and carrot in a couple tablespoons of bacon grease until the onions are softened and translucent. Add the tomato, spices, bacon, broth, Worcestershire sauce and rum. Bring to a boil then reduce the heat. Simmer until the potatoes are nearly fork tender. Stir in the thyme, green onion and parsley and salmon. Cook until the salmon is heated through. Discard the bay leaf prior to serving.

This recipe was somewhat inspired by Bermuda’s fish chowder and the conch chowders popular in the Caribbean. I’ve been researching vacations (oh, for a break from cooking and dish washing) and of course, that involves researching the local cuisines. While salmon isn’t the traditional fish found in these local chowders, the fact that I had a pound of it leftover after another meal made me give it ago. It worked really well! Salmon is “meaty” enough that it doesn’t breakdown in the soup and its richness contrasted well with the lush spice of the broth. It is also the perfect chowder as we creep towards warmer weather, it isn’t as heavy as most chowders and everyone knows spicy foods cool you off!