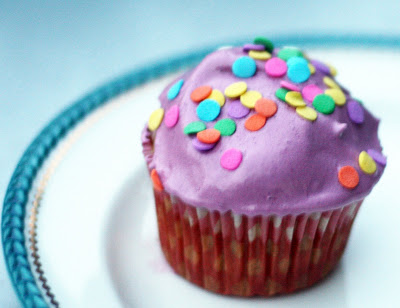 Directions:
For the cupcakes:
Bring the milk and tea to a boil. Remove from heat and allow to cool to room temperature. Discard the tea bags after thoroughly squeezing out all the milk back into the pan. Preheat oven to 350. Line or grease and flour 6 wells in a cupcake pan. Place all of the ingredients in a large bowl and mix until well combined. The batter will be rather thin, so don’t be alarmed. Fill each well 2/3 of the way full. Bake about 15 minutes or until a toothpick inserted the center of a cupcake comes out clean or with just one or two dry crumbs. Cool briefly in the pan, then remove cupcakes to wire racks to cool completely before icing.

For the frosting:
Beat the egg whites and salt to soft peaks using an electric mixer. Meanwhile, in a medium saucepan, bring sugar, lavender and water to a boil, stirring occasionally. Continue to boil until it reaches soft ball stage (when a drop of the syrup forms a soft ball when dropped in cool water) while continuing to stir occasionally. Whisk the mixture through a fine sieve into a heat safe measuring cup and discard the lavender. Keep the mixer running (to be safe use a stand mixer or a friend to complete this next step) and pour a continuous stream of molten syrup into the egg whites. Continue to beat for about 5 minutes or until the frosting is fluffy, glossy and cool. Frost cooled cupcakes.

Recently I was approached by Tazo to develop some new recipes using their tea. It is actually quite fun, I got a big box of various teas to play around with and once a week for three weeks I will be sent a mystery ingredient to use in the recipe as well. I was excited for the challenge, after 6 plus years and nearly 1,100 original recipes, sometimes a culinary puzzle is welcome. This week it was culinary lavender. I haven’t made anything with lavender before so that was an interesting twist.

I had lots of ideas but I decided to go classic and make some cupcakes. Who doesn’t love cupcakes? No one I would like to know. These cupcakes are more for grown ups than the little ones I think, they are subtly flavored and not overly sweet. The cupcakes themselves taste like milky tea and are quite light textured. I love how the fluffy lavender frosting turned out, that is one of my favorite types of frosting to make and as I hoped, the lavender flavor was strong but not overpowering. I did add a little dye to the icing, something I don’t always do but I was worried the icing might look grey or a little “off” left unadulterated. I also made a bit too much frosting so if you double the cupcake recipe, I think you could use this same frosting recipe without alteration and have enough to frost all of the cupcakes, it is just a tricky recipe to scale down any further than I did.