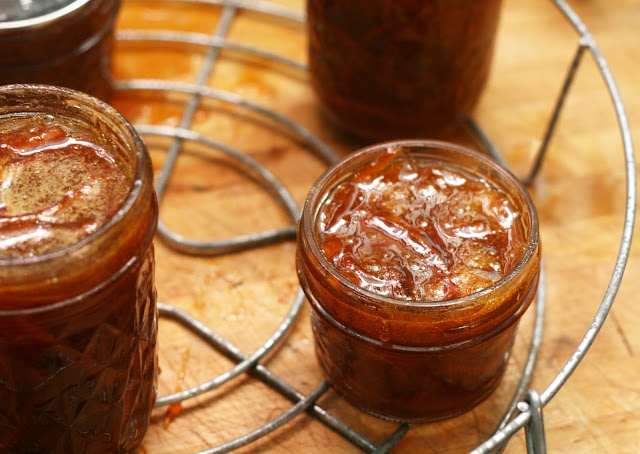 Directions:
Wash the peel. Cut the minneolas in half across the “equator” and remove the pulp to a large, heavy, wide bottomed pot. Add the water and bring to a boil. Discard half of the peels. Scrape the pith from the peels using a spoon. Slice the peels into 1/8 inch wide slices. When the pulp water mixture has reduced and thickened a bit strain it through cheese cloth back into the pot. It should yield about 4 cups of juice. Add the peel. Cover and cook until the peel softens, stirring occasionally, about 10 minutes. Add the lemon juice, rye, sugar, vanilla bean and bitters. Cook over low-medium heat until it thickened, stirring occasionally, about 40 minutes. You can dribble some on a cold plate and see if it gels but I could tell it was ready by how it started to form “sheets” of liquid coming off the spoon vs. coming off in drips. Fish out the vanilla bean. Divide evenly among jars. Process for 10 minutes in a hot water bath.

Note: A great source for canning information is the Blue Book guide to preserving. I highly recommend it for learning how to can. Here is a bunch of other canning books and equipment I find useful.

Minneolas (a cross between a Duncan grapefruit and a Dancy tangerine and some times referred to as a “Honeybell”) are rare sights around here and my husband was excited to find and bring home a huge bag of this delicious fruit. I have to say though, he saw them, bought them and then once he got home could not remember what their name was. It involved a rather long conversation on the phone with a nice girl from the local farm store he bought them at to figure out what exactly they were.

Minneolas are so fragrant! Our house smelled like a citrus grove (in a good way, not a fruit rotting on the ground sort of way) all day. I almost was tempted to move to FL. Of course, we had to pick the first truly warm day of the year to can (we also made that yummy orange jam at the same time) but that is another story involving many fans, opening of  windows and shutting off the heat for a few hours.

I had not made marmalade before and it was both easier and trickier than I thought it would be. It basically took all day and quite a few steps to yield only 4 8-oz jars of marmalade. Which is about what I expected but the chopping the peel, squeezing the pulp was pretty hands-on intensive and time consuming. You can’t help but think that after all that work you’d want to cut someone who’d dare try and sneak a taste, much less a jar. My husband is a much better chopper than I so he chopped the peel and removed the pith for me which helped. We actually chopped all the peel so we could experiment on the leftovers. I will keep you posted on that! I recommend that you do what we did and set up in front of the tv and watch something (preferably British since you are making marmalade-we watched Inspector Lewis) to distract yourself from the monotony of the chopping/peeling steps. The boiling bits don’t require much attention so you can keep watching your show and just check on it occasionally.

The truly only tricky part was deciding on the best method of cutting up the skin and deciding if it is better to let the fruit macerate in sugar overnight, to juice it or boil the pulp etc. I swear every marmalade recipe I found called for a different technique and the reasons for the differences were not (nearly never) always entirely clear. I think this one worked because minneolas are easy to peel and the pith can be easily removed. If we had left all of the pith in, it would have become too bitter, in my opinion. As it was is, the finished product is on the bitter side of sweet but not uncomfortably so. ANYWAY! This marmalade has a wonderful, deep tangelo flavor that is only enhanced by the old fashioned-inspired add-ins we came up with. I can’t wait to eat it with everything!