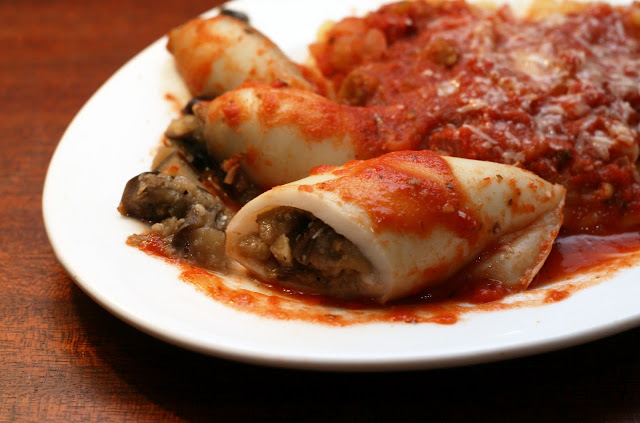 Directions:
Saute the eggplant, pepper, shallot and garlic in olive oil until the shallot is translucent and the eggplant is softened. Meanwhile, saute the onion in a Dutch oven until translucent then add the tomatoes and herbs and reduce heat to low. Remove the eggplant mixture from heat. Toss with breadcrumbs and capers. Allow the mixture to cool slightly. Fill each tube with eggplant. Do not overfill, the squid will shrink as it cooks. Pierce the squid with 1-2 toothpicks to seal. Place the squid in the sauce. Cover and cook 3-5 minutes or the squid starts to cook. Remove the lid and continue cooking until the squid is fully cooked and the filling is hot. Serve with pasta.

When I saw cleaned squid at the grocery store I knew I had to get it. I’ve been wanting to make stuffed calamari for years but the few times I’ve seen squid, it has been sold as a combo of tubes and tentacles and since the tentacles are heavier and seemingly more numerous than tubes, I’d have to spend a fortune to get enough squid tubes to stuff and then I’d have to make something with a couple of pounds of tentacles very shortly afterwards. This time the tubes and tentacles were sold separately. So I bought a pound of tubes (about 10? tubes)and then scrambled to think of something to fill them with. I had noticed eggplants when I first walked into the store and they looked really good so I went back and picked some up. I’m glad I did because I ended up making an Italian inspired dish and these in season eggplants were not only tasty but the perfect texture for stuffing the squid. The end result was wonderful. The squid wasn’t chewy and the eggplant was velvety. I kept the tomato sauce simple and it didn’t overpower the seafood at all.