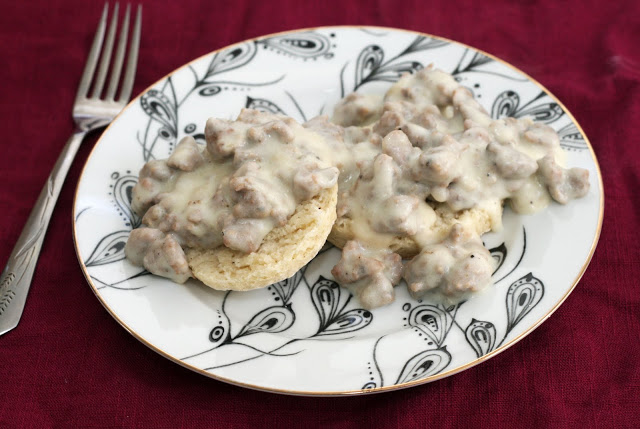 for the sausage gravy:

for the biscuits:
Preheat oven to 425. Line a baking sheet with parchment paper. Set aside. Flour a clean, dry flat surface.
In a large bowl, whisk together the dry ingredients. Add the yogurt and milk and stir until a smooth dough forms. Place on the floured surface and using a floured rolling pin, roll the dough out to about 1 inch thick. Use a 2-3 inch biscuit cutter and cut out biscuits. Arrange 1/2 inch apart of the baking pan. Bake for 12-15 minutes or until golden brown.

for the sausage gravy:
Melt about a tablespoon of butter to a skillet. Add the the sausage and cook, breaking up large chunks with the back of a spoon, until browned. Sprinkle with 1/4 cup flour and spices and cook 1 minute, stirring constantly. Stir in the milk. Cook, stirring continuously, until the the mixture thickens. Pour over biscuits.

We’ve been feeling rather Southern around the Rappaport house this summer as you might have noticed. Sausage gravy over biscuits is south of the Mason-Dixon favorite but one that is definitely on the heavy side. I love it but honestly, made the traditional way, it always leaves me feeling a little queasy. It is just so heavy! Pork sausage, pork fat, butter or lard biscuits. Too much. So I decided to make my own version that I could eat and enjoy. It honestly tastes a lot like traditional sausage gravy so much so, I think you could pass it off as pork if you wanted to be sneaky. The trick is using flavorful turkey sausage as your base. Then I made very light, fluffy and moist biscuits using Greek yogurt instead of butter or lard. They were awesome and I can’t wait to make them again. They were very fine textured (I even broke out my stash of White Lily flour for them) but substantial enough they didn’t get super soggy when doused with gravy. Best of all, I felt great after eating them! This really takes sausage gravy and biscuits from a “once a year” food to something you’d feel comfortable letting into more regular rotation.