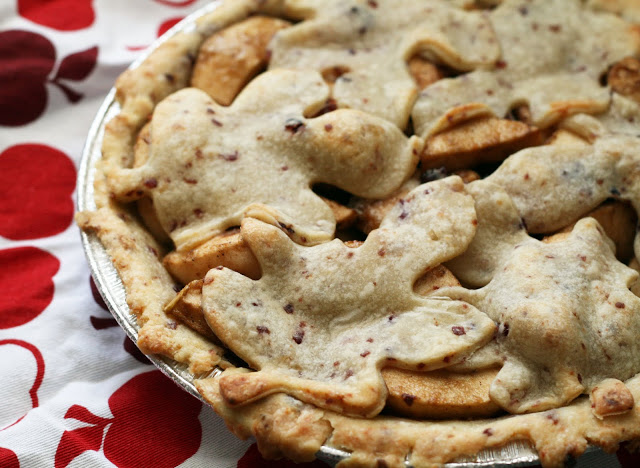 Directions:
Preheat oven to 350. Mix all of the ingredients together. Pour into a pie plated lined with a pie crust. Top with a second pie crust and pinch shut. Pierce the top crust with a knife or cut out shapes to vent. I used a large leaf shaped cookie cutter to cut out leaves and used them to create the top crust. Bake 30 minutes or until golden brown and bubbly. Cool then slice to serve. 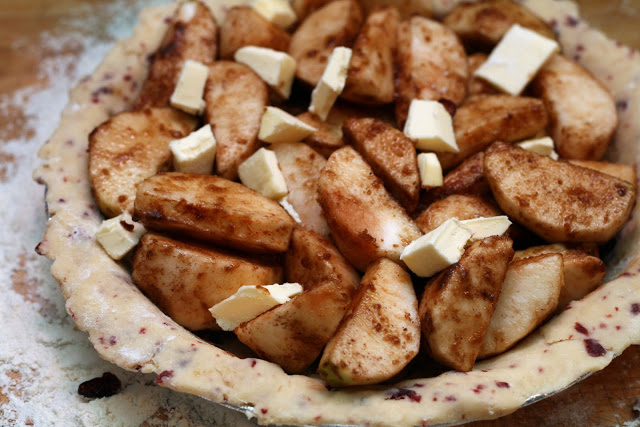 This is perhaps an award-winning pie! I’ve been helping the Baltimore Orchard Project, a group that harvests fruit in public parks and private homes that would normally go to waste and distributes it to those in need, by providing recipes featuring locally grown produce for their website and in the spring, teaching canning classes. They were invited to have a “celebrity” enter an apple pie on their behalf in a contest benefiting Carroll’s Hundred, an organization that hopes to build an historical greenhouse or orangery on an underutilized area of Carroll Park. Loving food and possessing a degree in Urban History, I was too happy to provide a pie! I had to make it in a disposable pie tin, which I had never used before but it wasn’t difficult. This recipe makes a little more filling than would fit in the disposable tin but I think  it would work perfectly in a regular pie plate, the disposable one was shallower than every one of my normal pie plates. I ended up making a couple hand pies with the leftovers, which was awesome because otherwise, I wouldn’t have been able to try the pie at all! Which would have been a shame because it is a truly scrumptious pie! I wanted to do something a little different so I thought I’d add some dried cranberries to the filling which ended up plumping up in the oven (a good call using dried, I think fresh might have oozed) and adding a pleasant tart note to the pie. I also left out cinnamon, perhaps a pie crime but one I think was inspired, as cinnamon tends to overpower everything else in the dish but in this pie, you can taste the apple, cranberry and the cheddar from the pie crust in every bite. Plus I love ginger and allspice more than I like cinnamon. It was lovely and I plan on making another one soon so I can have the whole pie to myself!