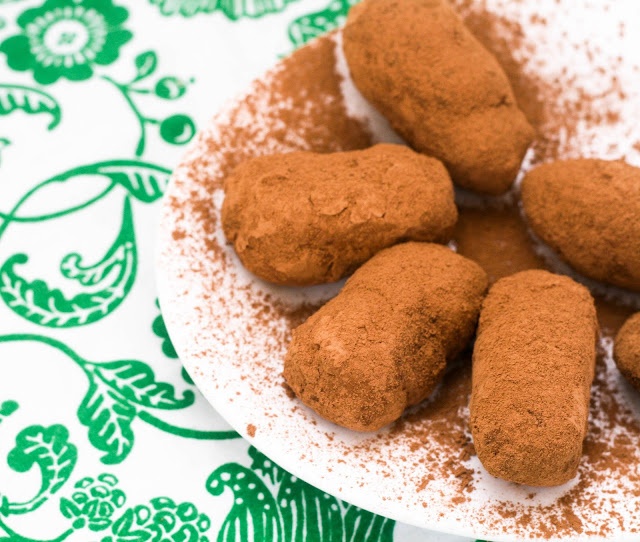 In a large bowl, mix together the peanut butter, butter, vanilla and confectioner’s sugar, until a thick dough forms. Set aside.

Whisk together the cinnamon and cocoa in a small shallow bowl. Set aside.

Use your hands to form 1 1/2-2 inch long ovals out of the peanut mixture. Roll in the cocoa mixture to coat. Repeat for remaining peanut butter mixture. It’s okay if they are a little unevenly shaped, they are supposed to look like dirty potatoes!

Store in an air-tight container up to 4 days.

Yield: about dozen candies (recipe can be doubled)

Three years ago I posted a recipe I created for Irish Potato Candy a treat made in Philadelphia to coincide with St Patrick’s Day. The candy isn’t made with potatoes but rather is a coconut candy that is formed to look like freshly picked new potatoes. It is rarely found outside of the Philadelphia/New Jersey/Deleware area so if you live further afield, it is great to be able to make your own at home.

While I love coconut (obvi) and that candy is really delicious (especially if you took my suggestion and mixed cocoa in with the traditional cinnamon coating), at the time and in the years since I’ve had a few people ask if there was a coconut-free version available. Without coconut, the candy would just be a plain buttercream, which while tasty, would make for a pretty bland candy, in my opinion.

Anyway, I was thinking about making a batch of the original version when it came to me that I could easily make a peanut butter version. It was just as tasty as the original recipe but with a more crowd-pleasing peanut butter and chocolate flavoring.  I chose to keep a bit of cinnamon in the mix as a nod to the original candy but straight cocoa would work as well. Very peanut buttery and the sweetness is tempered by the dusting of cocoa and cinnamon.

Serious Eats has a behind the scenes look at the original Irish potato candy factory that is worth a read.