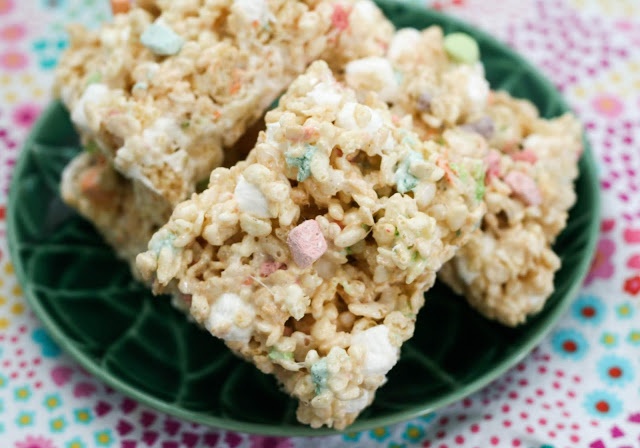 In a large bowl, toss together the cereal and dehydrated marshmallows. Set aside.

In a large, heavy-bottomed pan, melt the butter. Stir in 1 1/2 bags marshmallows and vanilla. Stir until they are fully melted. Turn the heat to the lowest setting. Stir in the cereal mixture. Remove from heat and stir in the remaining half bag of mini marshmallows. Immediately scrape into the prepared baking dish. Very gently, smooth it out so it is an even layer without pressing down and compressing the mixture. Allow to cool at room temperature until firm enough to cut into squares. Turn out the dish and cut into squares. Store at room temperature in an airtight container.

*I bought these in bulk at a farm stand/old fashioned candy store while on a road trip but they are also available on Amazon.

Rice Krispie Treats, 1980s commercial aside, are one of the easiest desserts you can make yet still I find myself tweaking the recipe. The back of the box recipe is fine but they can be a little dense. A bakery near us makes huge, thick squares of Rice Krispies Treats that are very good, soft and marshmallow-y but cost roughly the same as a whole box of cereal for one treat. It was worth it to try once but I can’t bring myself to keep buying them when they make a whole slew of delights I can’t or won’t make at home.

Note: I did use generic marshmallows and “crisped rice” cereal I purchased at Aldi for this recipe. I don’t like Jet-Puffed marshmallows and I can’t tell the difference when it comes to the cereal. The marshmallows are only 88¢ a bag and the box of cereal (I only used half!) was $ 1.29. You can’t beat that.