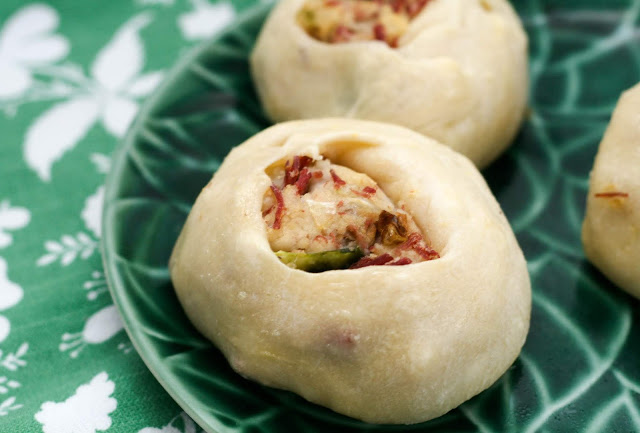 For the filling: (can be done the day before and refrigerated, covered overnight)
Heat the schmaltz in a skillet. Add the onions and cook until quite dark. Add and cabbage and saute until soft, seasoning with salt and pepper. Mash the onion/cabbage into the potato, stir in the corned beef. 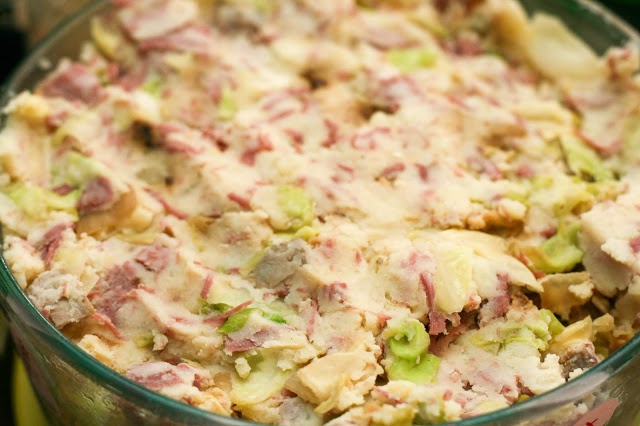 Preheat oven to 375. Allow your filling to cool while you make the dough.

Divide the dough into 12 equal pieces. 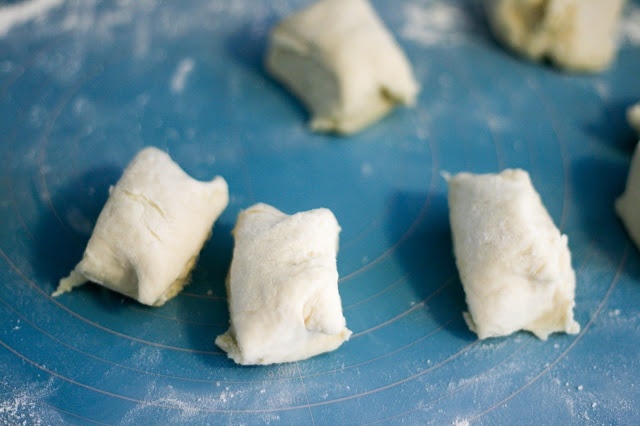 Roll each piece out on a floured surface to a 5-inch circle about 1/8 inch thick (I like using this small rolling pin). Place a 1/4 cup of filling in the middle. Fold the sides up to close, pinch shut. Place seam-side down on a lined baking sheet. Prick the top with a fork, once.  Alternatively, wrap the dough around the filling, leaving about 1/2 inch wide window on the top.

Beat the egg and water together for the egg wash. Brush over the top of the knish. Repeat for remaining dough. Bake for about 20 minutes or until very hot but not browned.

Note: As the dough contains dairy, this means this recipe is not kosher. If you’d like to make a kosher version, there are a ton of oil-based knish bough recipes that this filling would be wonderful in. We prefer this dough as we think it is tastier, easier to work with and less greasy and keeping kosher is not a concern.

How is it almost St Patrick’s Day already?! I have to admit, I never really celebrated it beyond wearing green to school and don’t do much now but one thing I’ve really enjoyed over the years is coming up with new recipes using corned beef and cabbage. It’s oddly very satisfying. I think my favorite is still corned beef and cabbage bao and corned beef stuff cabbage is a close second.

I actually made this just after St Patrick’s Day last year and saved the recipe so I could actually get it up in time for you to make it before the holiday. Take advantage of those corned beef sales!

Not only do we love knishes here there is a neat origin story for the very American combination of corned beef and cabbage. Back in the early 1900s Irish and Jewish immigrants lived side by side in many lower-income NYC neighborhoods like the Lower East Side. Back in Ireland cabbage and another cured meat, bacon was a popular dish. Corned beef had been popular in Ireland but was more due to English laws mostly exported and out of the reach of most Irish citizens. By the time of the Irish Potato Famine when many Irish people immigrated to the US, it had fallen in out of favor for the more readily available and affordable bacon–if they had the money for meat at all–potatoes were the real staple of their diet.

Apparently, in New York, the Irish immigrants noticed that the more readily available corned beef from Jewish delis, the kosher butchers where they were already shopping and food carts was fairly similar (and inexpensive!) to Irish corned beef (and salty back bacon) and started cooking that with cabbage and potatoes. Voila: the American tradition of corned beef and cabbage began.

To celebrate the fusion of Jewish and Irish culture all those years ago, I had to make the deli classic knishes! They are easier to make than you’d think and while I love a potato knish, adding corned beef and cabbage really kicks up the flavor. They are amazingly good.