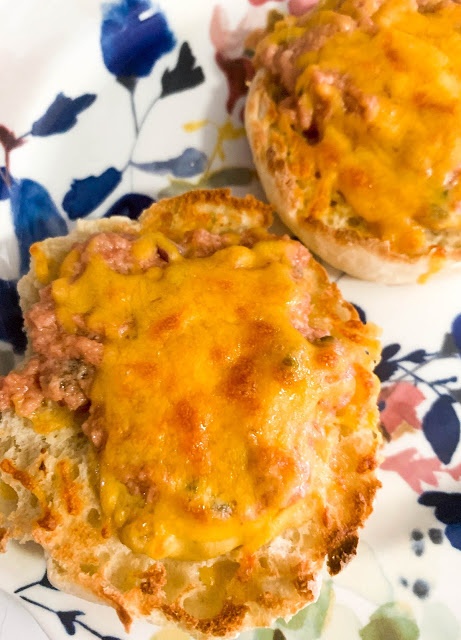 Toast the English muffin halves and spread with mustard.

In a small bowl, stir together the ham, onion and relish. Spread over the muffin halves, sprinkle evenly with cheese and broil 1-2 minutes until brown and toasty. Serve immediately.

*Homemade would be fine too.

I saw this tweet from Helen Rosner about the comments on an article about deviled ham and realized I had never tried it before. I tracked down the article and she was right, the comments were super heartwarming. Who knew some many people had such love for canned deviled ham? I had actually made homemade deviled ham years ago and ham salad, which is similar  but I had never had the canned version. We just weren’t canned meat (beyond tuna) family growing up. My husband’s Jewish and I can’t think of anything more trayf than a canned ham product so it wasn’t a family dish for him either. I became a spam fan as an adult so I am certainly not above a canned processed meat product.

We discussed canned deviled ham and when my husband went to the grocery store last week, he picked us up two cans. They are wrapped in paper which endeared them to me. I love it when you can find Lea & Perrins wrapped in paper, it looks so festive. He bought Underwood brand (are there other brands? Hormel maybe?) because that is what the article said was best. What better time to try canned deviled ham than during a pandemic.

I read all the comments sharing how they (or their family members) served the deviled ham. So many recipes from dips to deviled ham deviled eggs to all sorts of sandwiches. The ones that sounded best were the broiled ones. Pepperridge Farm white bread was mentioned more than once and I actually have some but I thought another suggestion–English muffins would be better–sort of like the old fashioned “crab toasties” you see in community cookbooks. So I cobbled together what I thought we’d like–mustard instead of mayo, dill pickles, red onion, cheddar and broiled us up lunch.

You know what, it was pretty tasty. Super savory (and salty, maybe don’t serve this with chips) and really good with the mustard and pickles. I’d totally eat this again.