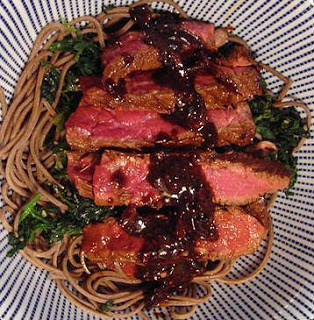 Directions:
Place the steak, soy sauce, chili pepper, sake, sesame oil, lime juice, garlic, sesame seeds and green onions in a large ziplock bag and allow to marinate at least 45 minutes or up to overnight. While the steak is marinating soak 2 oz. dried shiitaki mushrooms in 1 cup hot water. Remove steak from marinade, reserving marinade, and sear on a hot pan. For a 1″ thick steak, cook on high heat for 2.5 minutes on each side for rare steak. Remove steak to a pan and cover with foil. Let sit for 5 minutes and then slice thinly. While steak is cooking, squeeze out mushrooms, reserving liquid, and chop them. Add the mushrooms, cornstarch and liquid to a sauce pan with the marinade. Bring sauce to a boil, cook for 5 minutes and then add the cornstarch mixture. To serve: thinly slice the steak and arrange on a bed of soba noodles and spinach**. Drizzle with sauce.

*This is easiest with a mortar and pestle. In lieu of that, you can crush them between two sheets of wax paper with a rolling pin.

**sauteing the spinach with some minced garlic and sesame seeds is a nice touch, but not entirely necessary.

Some how the picture didn’t come out as appetizing as I would have hoped. I assure you, this was an entirely delicious meal. Dark soy sauce, which vaguely reminds me of some sort of molasses, is a bit strong tasting for dipping but is great for marinades. It imparts a lot of flavor in a relatively short period of time, which makes it great for weekday dinners. Every once in a while top round (some times called “london broil top round”) will go on sale for just under $2 a pound (it is generally about $7 per pound) and we always stock up. It freezes well and if you get a thinner cut, it defrosts rather quickly.