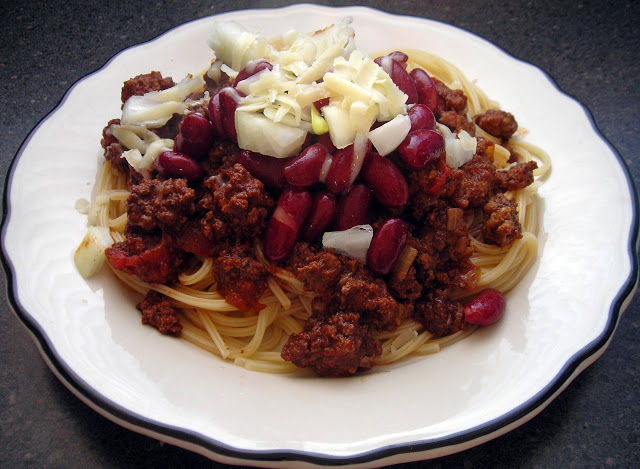 Directions: In a large skillet saute onion, garlic, ground beef, and chili powder until ground beef is slightly browned. Drain off any excess fat. Add all of the remaining ingredients. Reduce heat to the lowest setting and simmer, covered, for about 1 hour, stirring occasionally. Then remove the cover and simmer for an additional 1/2 hour or until most of the liquid is absorbed or evaporated but the mixture is still a little runny. Remove from heat. Arrange spaghetti on plates.
Now there are several ways to eat Cincinnati style chili:
3-way: Spaghetti topped with chili, covered with shredded cheddar cheese
4-way: Spaghetti topped with chili, then cheese, then onions
5-way: Spaghetti topped with beans, chili, cheese & onions

Serve the crackers on the side. 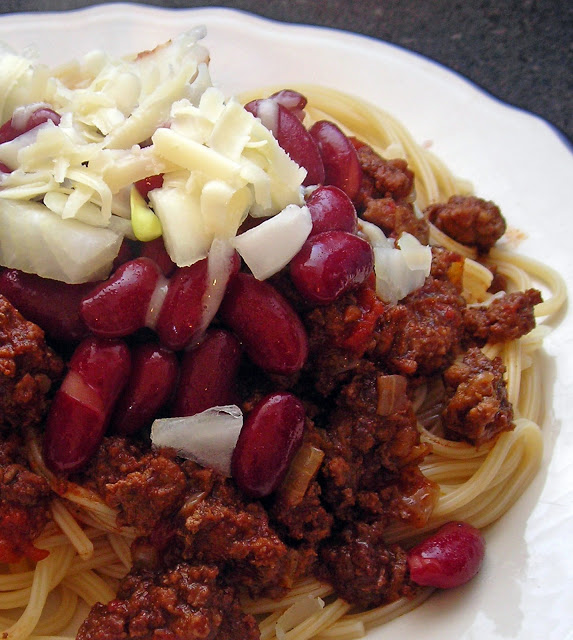 When people think of chili, most people think of Texas. But did you know that Cincinnati has more chili parlors per capita than any other city in the US? While I’ve never had the good fortune to visit Cincinnati but I love their unique style of chili. Cincinnati chili is basically a thin chili (almost more of a meat sauce) that is flavored with some unusual spices for chili, namely cinnamon, cocoa, and allspice and is served over cooked spaghetti. You can buy flavoring packets to make it, but it is almost as easy to make your own. Not to mention how difficult it is to find those packets outside of the immediate vicinity of Ohio. After some experimentation, I think I’ve cracked the Cincinnati chili code.

It did require some research; I read dozens of old newspaper articles about the chili (Greek immigrants Tom and John Kiradjieff began serving this chili in 1922 at their hot dog stand the Empress which explains the oddly Mediterranean flavor of the chili) and read dozens of recipes, the majority of which were either conflicting or not very well written. Beyond a basic agreement on spices, there are some disagreements about the best way to make Cincinnati style chili. Some of the various conflicts include boiling the meat vs. sauteing (I find that sauteing the meat yields a meatier tasting chili while still maintaining a “loose” texture), whether to use diced tomatoes or tomato paste or tomato juice or tomato sauce (diced has a better flavor and the pieces almost melt away during cooking), if onions belong in the chili or just on top (again, the onions add flavor and nearly melt away), whether to use chopped chocolate or cocoa (I think cocoa mixes in better), some recipes use broth and others cook the chili for 3 or more hours (hard to keep all the liquid from evaporating). There is also a purported 6th way of serving: spaghetti, beans, chili, cheese, onions & sour cream. Despite there being more ways to make it then there are citizens of Cincinnati, I’ve come up with this “master” recipe which I think yields the best result of all of the methods I tried with the strongest, truest flavor.