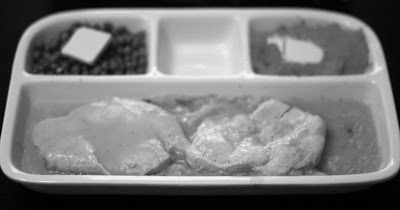 Directions:
Preheat oven to 350. In a small skillet, melt the butter. Add the onions and celery and cook over low heat until the onions are soft and translucent but not browned. In a small bowl, mix together the onion and celery with the rest of the stuffing ingredients. Divide evenly between two plates. Spread until it creates a flat surface to place the turkey on.

In a nonstick skillet, quickly brown each cutlet on both sides in butter. The turkey does not have to be cooked all the way through. Place two cutlets over the stuffing on each plate in the largest well. Add the tablespoon of butter and flour and cook until it turns a nutty brown. Add the stock, spices and wine and cook, whisking occasionally, until it thickens and reduces a bit. Divide evenly over the turkey. 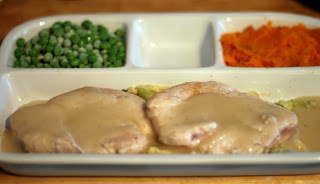 Fill the other two wells with frozen peas and mashed sweet potato. Cover tightly in foil and bake for 15 minutes or until the meal is piping hot and the turkey is cooked through. Top the sweet potato and peas with generous pats of butter.

Notes: To save time, I baked the potato the day before I made the TV dinners and scooped it (still cold) into the well and then mashed it with a fork.

If you don’t have an oven safe divided dish, any oven safe plate or even a pie plate would work. I used oven safe ceramic divided plates that I bought at Crate &a Barrel years ago. I found ones that look similar (identical?) for sale here.

As I mentioned in my piece for the Kitchn about our New Year’s Eve retro dinner and movie marathon, the 1950s were a wasteland when it came to home cooked food. There was a major push towards convenience cooking that was partially due to innovations on freezing and packaging techniques. It was just so modern to serve your family a frozen meal or shelf stable product, just think of all the time, fuss and mess you were saving yourself from! So this year, I decided to recreate some prefab products using real ingredients.

Swanson introduced the first truly successful complete frozen dinner and coined the term “TV dinner” in the early 1950s. The first dinner was turkey with turkey gravy, mashed sweet potatoes and peas. It was a huge success and was associated with a large print and television campaign. Other varieties soon followed but it wasn’t until 1960 the four part divided tray (and dessert) was introduced.

Now, it has been some years since I’ve eaten a frozen meal but I have to say, this is much better than any frozen meal could hope to be; the homemade turkey, gravy and stuffing is simple but very flavorful. Perfect for a weeknight dinner in front of the TV.