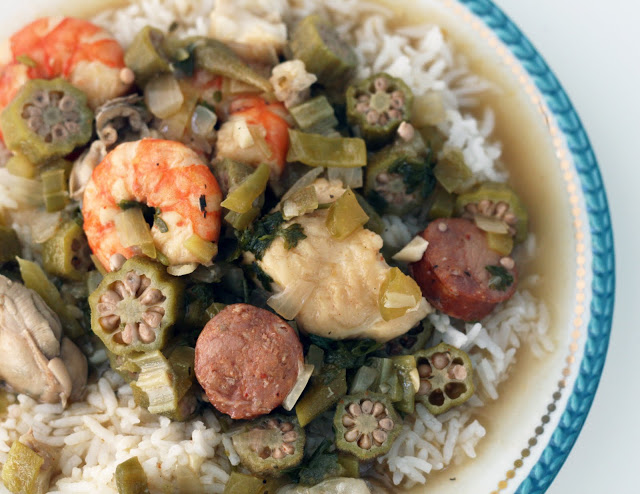 Directions:
Over medium heat, cook the flour, spices and butter/bacon fat together, whisking pretty often until it turns brown but doesn’t burn. Add the onions, garlic and peppers and saute until starting to soften. Add the stock and bring to a simmer. Add the sausage and okra. Cook for 30 minutes. Add the shrimp and catfish. Cook until they are almost cooked through then add the oysters in their liquid. Cook until the oysters are cooked through. Serve over rice.

I have to say, I make pretty good Cajun food. When my husband brought home a bunch of seafood with an eye on making gumbo, he suggested I make the roux and take a more supervisory role for the rest. Fine with me! I make my roux over a lower heat than I’ve seen called for in cookbooks which makes the process much less fraught but yields the same results in just slightly more time. I also like to add the spices to the flour which makes them nice and toasty tasting. Beyond that I don’t get too fancy; cubanelle peppers instead of bell (bell peppers are so insipid) and a jalapeno thrown in for extra spice. Since it is a month with an “r” in it, local oysters were a natural fit as was my favorite catfish. Rounding it out is shrimp but I bet crawfish or even (for an extra luxe touch) chunks of lobster would be great. This is my favorite kind of gumbo, homey and comforting but the seafood makes it seem special. It is also surprisingly quick to make which makes it a great choice for a weekday meal.