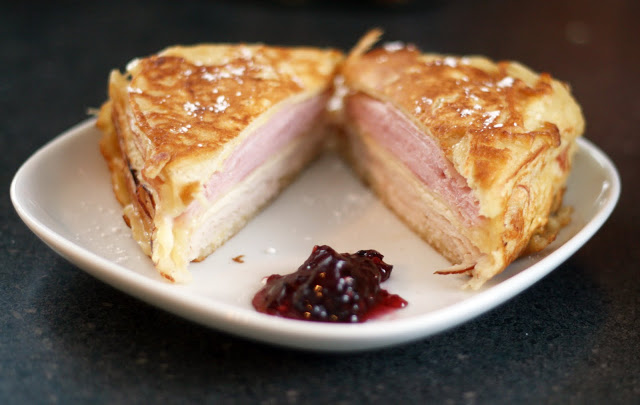 Directions:
Whisk together the batter ingredients. Set aside. Place four slices of bread on a clean surface. Spread a thin layer of mustard on each. Layer with a slice of Swiss and top with a few slices of turkey. Top with a slice of bread.

Spread with a thin layer of mustard, top with a few slices of ham and then top with a slice of cheese and the remaining slices of bread. Melt butter in a skillet. Pour the batter in a shallow bowl and dip each side of the sandwich in batter. Cook one at a time, covering briefly if needed to cook the sandwich through. Cook one side then carefully flip the sandwich using tongs and cook until golden. Use the tongs to hold the sandwich vertically and cook each side. 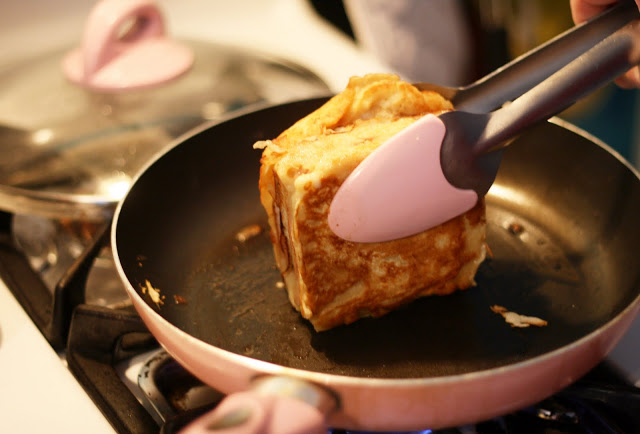 Sprinkle with confectioners’ sugar and serve with jam to dip.

No one seems sure exactly how or why Monte Cristo sandwiches got their name but it seems like they were the result of some club sandwich evolution crossed with the Croque Monsieur . They were first mentioned the Brown Derby Cookbook published in 1949 but they reached their national peak of popularity in the 1950s. Some restaurant chains deep fry their Monte Cristo sandwiches but early recipes call for pan frying in butter which is not only easier to do at home, is really tasty. Oddly, I wasn’t able to find a authentic recipe that actually included a recipe for the batter (even the 1949 Brown Derby version just calls for dipping the sandwich in a “light egg batter”) so I came up with a batter that was a little thinner than pancake batter but more substantial than dipping it in egg and milk as I would for French toast. Early recipes also call for buttering the bread on each side. I opted to use mustard instead which would hold the sandwich together as well as butter while cutting down a bit on the over the top richness. It also added a sharp flavor that was welcome.