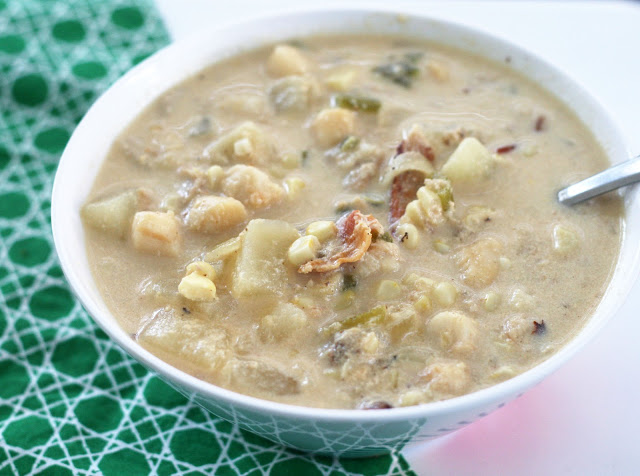 In a Dutch oven, cook the bacon. Drain off most of the rendered fat. Saute the onion, potato, garlic, jalapeno, and celery until the vegetables are softened. Add the pepper sherry, spices, milk, and evaporated milk. Simmer until the potatoes are nearly cooked. Add the crab and scallops and simmer until the scallops are fully cooked.

When we were in Maine, we ate a lot of chowder. No clam chowder oddly (maybe it was out of season?) but lobster chowder, fish chowder, seafood chowder, shrimp chowder. They were all very good but I found that the chowders I liked the most had a lot of “stuff” in them. Most of the chowders we had were straight up fish and broth. Which again, were tasty but I liked the ones with a bit of vegetables and other seasonings as well. Not to mask the fresh seafood but to enhance it. I used some cute bay scallops and fresh blue crab meat. I was just going to go with the scallops but 1. I am a Baltimorean and think everything tastes better with crab and 2. I like how the crab pops up in more bites than the scallops do. I didn’t want a spoonful to be seafood-free and scallops can be elusive, slippery things in soup.