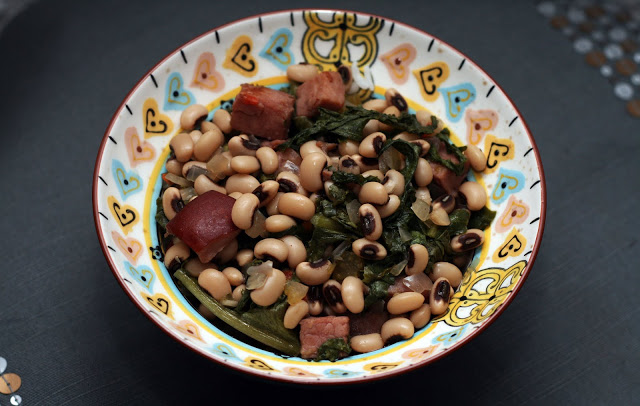 Directions:
The night before you want to serve the dish, place the black-eyed peas in a 4 quart slow cooker. Fill it with water. Cover and allow to sit overnight. Drain, return the black-eyed peas to the pot and add the spices, ham, Worcestershire sauce, vinegar, onion, peppers, garlic, and celery. Stir. Cook on low 8-10 hrs. One hour before you would like to serve, stir in the escarole. It might look like it won’t fit in the slow cooker but a few stirs should be enough to incorporate it. Cover and continue to cook*. Serve as-is or over cooked white rice.

*If you are pressed on time at night, you can add the escarole in the morning but it will be quite soft by dinnertime.

Tip: If you have time in the morning, lightly brown the ham on all sides to bring out the flavor before adding it to the slow cooker.

This recipe is a good luck powerhouse! Black-eyed peas are frequently served on New Year’s Day because they swell (or look like coins, depending on your source) when cooked symbolized growth and prosperity in the coming year. Cabbage or collards is frequently served as well as it symbolizes paper money. I swapped another leafy green, escarole, for the cabbage but the sentiment is the same. The last bit of luck comes from the ham which is said to be lucky because pigs are portly, symbolizing prosperity and they “root forward” symbolizing progress.

I made this recipe so it is a bit soupy, perfect for serving over rice or mopping up with crusty bread.