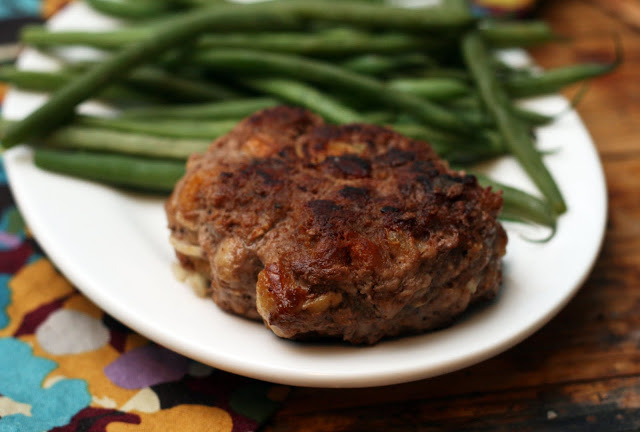 Directions:
Mix together all ingredients in a medium bowl. Form into about 6 flat patties. Set aside. Heat some canola oil in a skillet. Add the patties and cooking, turning once until cooked all the way through and browned on both sides. Drain on paper towel lined plates. Serve hot.

Growing up, my Grandpop lived in a basement apartment in our house. He had his own kitchen and made his own meals, only coming upstairs for holidays! He made a lot of food I miss quite a bit including his unusual version of fried chicken (one day I will recreate it but it makes me sad to think about eating it without him), ever changing beef stew, ground beef gravy, home fries and what he called meat cakes. I’ve talked before about Baltimore’s German heritage so I shouldn’t have been surprised when, after making meat cakes a while back in a fit of nostalgia, I googled meat cakes to see if they were a Baltimore thing or just a Grandpop thing and found that they were in, fact, a German thing. Grandpop always made them with straight ground beef but I had some “meatloaf” mix on hand (ground beef, pork and veal package together) when I recreated them so I used that and liked it quite a bit. After doing some sleuthing into frikadellen, which apparently, are what I’ve been calling meat cakes all along, I found they are often made with a mixture of meats, often, the beef, veal and pork mixture I unknowingly used. Perhaps frikadellen are in my blood. I had always thought of them as a thrifty choice with their use of bread to stretch out the meat, a perfect choice for immigrants and railroad workers in Pigtown here in Baltimore, but if they have German roots maybe that was only part of it, perhaps they were more of a precursor to the hamburger. Who knows? At any rate, meat cakes are tasty and simple and when I’m feeling nostalgic I add them to the menu, no matter what they are called.