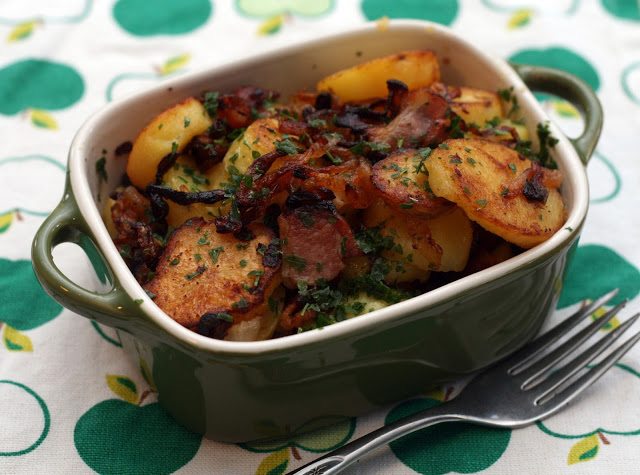 I was looking up the definition of home fries the other day and came across a mention of bratkartoffeln, the German version home fries. I hadn’t heard of them before but when I read what they were (basically potatoes fried in bacon and onions sprinkled with parsley) answered a question I’d always had about home fries. Why were the home fries my Grandpop would make so good (and made with bacon and onion) and the home fries I’d get in restaurants so boring (mostly just plain fried cubes of potatoes)?

I think my Grandpop was making a version of bratkartoffeln, possibly without even realizing it. I had a similar eureka moment earlier in the year when I discovered that the “meat cakes” he had been making were very similar to frikadellen, another German dish. It makes sense, thanks to a ton of German immigrants in Baltimore in the 1800s we ended up with a lot of German influenced recipes (like sour beef, Baltimore’s gingersnap-laden answer to sauerbraten) and smearcase (the German/Penn-Dutch influenced Baltimorean answer to cheesecake) that were made by many Baltimoreans whether they have German heritage or not.

Much like this bratkartoffeln, which is very similar to the home fries I ate growing up. The major difference is in the technique. This recipe has you caramelizing the onions, then cooking the bacon and then adding parboiled potatoes. Grandpop’s home fries have you cooking the bacon, removing it and draining the pan before cooking the onions and raw potatoes together and then adding the bacon back in. Both are delicious but the flavor in bratkartoffeln is richer (no draining of the fat) and deeper (very caramelized onions, very browned potatoes) than the home fries. Grandpop’s version is a fair bit healthier, I’d wager and very good as well.