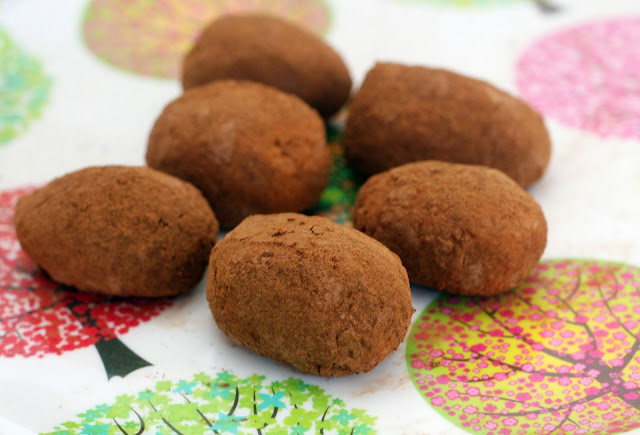 In a large bowl, mix together the coconut, salt and sugar. Then stir in (or beat in with the paddle attachment if using a mixer) the cream and then the vanilla paste until a firm, sticky, paste-like mass forms. Set aside.

Whisk together the cinnamon and cocoa in a small shallow bowl. Set aside.

Yield: about 2 dozen candies (recipe can be halved)

*This recipe uses a lot of cinnamon, if you have a Costco (or similar warehouse store) membership, good quality cinnamon can be purchased there quite cheaply.

Growing up I had a friend who’s mom would make homemade candy for every holiday. Tons of fudge for Christmas, homemade candy eggs at Easter and at St. Patrick’s Day, Irish Potato Candy. I hadn’t thought of them in years but after passing the remnants of the St Patrick’s Day parade this weekend, I got to thinking about how odd it was that I see so many references to corned beef and cabbage; whiskey, beer and Irish soda bread this time of year but no real mention of Irish Potato Candy. I came home and googled it and it turns out there is a reason I don’t hear much about the candy; it is a regional treat central to Philadelphia! Well, Baltimore is not Philadelphia but we are only 1 1/2 hrs south and have a good sized Irish-American population so it makes sense they’d trickle down here, even if in just in homemade form. Despite their name, they don’t have potatoes in them, they are coconut candies rolled in cinnamon to mimic a potato pulled fresh from the ground, still covered in dirt.

This article in Serious Eats gives a good overview of the history of the candy and a behind-the-scenes peek at the Oh Ryan’s Irish Potato factory in Linwood, Pa. I made mine to the best of my memory with a bit of a tweak: instead of just cinnamon, I coated them in unsweetened cocoa as well. I like cinnamon, but straight cinnamon is a bit overwhelming. You could also dip them in just cocoa powder, the effect will be the same. I did read about cream cheese versions, but I am sure the ones I had years ago did not use cream cheese so used heavy cream instead. The lack of cream cheese also means these can be stored at room temperature, in a sealed, air-tight container, up to 5 days but I will say they are best consumed the first day or two.