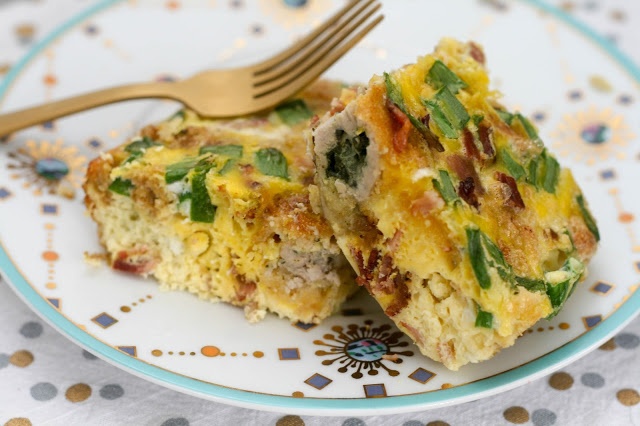 In a small, shallow bowl, whisk together the cornmeal, flour, salt, and pepper. Dredge each oyster in the cornmeal mixture and fry, turning once until golden. Drain on a paper-towel-lined plate.

Meanwhile, beat together the eggs, milk, salt, and pepper until fluffy.  Stir in the scallion and bacon. Oil an 8×8-inch baking dish.  Arrange the oysters in a single layer in the bottom of the dish.

Pour the egg mixture into the dish and bake for 40 minutes or until fully set in the middle. Allow to cool 5 minutes. Slice into 9 squares and serve.

It is prime oyster season here and I’ve been scoring pints of local oysters for under $10. The Hangtown fry is one of those weird dishes that had to have been invented by an American. Who else would think of adding fried oysters to scrambled eggs? There are a lot of variations and stories about the Hangtown fry but basically, it was an expensive breakfast that originated with miners during the California Gold Rush. Think: oysters were plentiful but not up in the mountains. It is only relatively recently that oysters can be safely purchased year round so think about having to keep them cool and alive in the 1880s and hauling them up a mountain! Only a successful prospector would think of such a meal! Other expensive ingredients would have been bacon and eggs so why not throw them all together in a sort of loose omelette?

It is a little labor intensive to make a Hangtown fry and it is tricky to make it for a crowd and have it ready for everyone to eat at once so I thought turning it into a frittata was a clever move. It really only took about 20 minutes of prep time–I fried the bacon and the oysters at the same time and since it is a one-step breading process, I just dredged and dropped them in the hot oil one after another. Oysters only take about 5 minutes to fry, even if they are big “select” size oysters. I was worried about the texture but the oysters held up perfectly and the breading was still pretty crisp and provided that “fried” taste that is really needed to make this a Hangtown Fry-ttata vs a generic oyster frittata. It helps to use good bacon too, I like True Story bacon for dishes like this because it is thick and has a good porky, smoky flavor and isn’t too salty but any thick cut bacon would work.