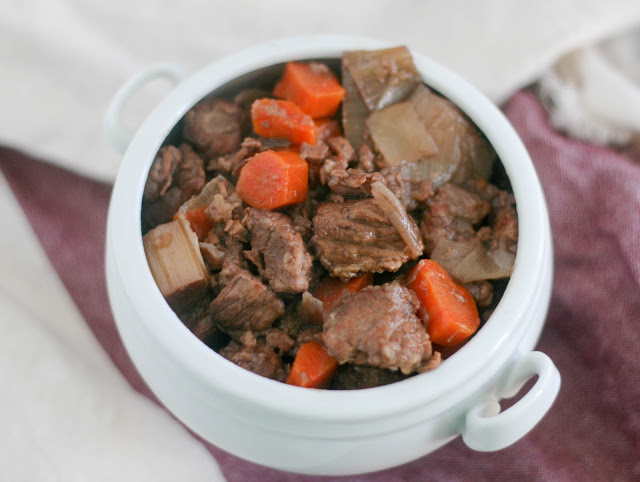 Directions:
Heat a small amount of oil in a large skillet. Toss the meat with the flour until lightly coated. Saute the meat until browned on both sides. Add it to a 4-quart slow cooker. Top with remaining ingredients. Cook on low for at least 8 hours and up to 10. Stir. If it look a lit too soupy, turn to high and cook with the lid slightly ajar until thickened. Sample the stew. If it is slightly bitter (this can happen depending on the wine used) add a small amount of sugar and stir it in until dissolved. Remove and discard the cinnamon stick. Serve it French style with crusty bread or American style over mashed potatoes.

Pro Tip:
I had to go out very early the morning I was going to make this so I put the cinnamon stick in the (off, cold) slow cooker the night before and placed the juice, wine, zest, spices, and vegetables in a resealable bag in the refrigerator overnight. My husband was working from home so he sauteed the meat and put it in the slow cooker then poured in the remaining ingredients and started it cooking.

*I just use frozen, prepped leeks and defrost them overnight in the refrigerator

Daube is a Provençal style of stew that uses beef, aromatics, and vegetables and is traditionally made in a daubière, a type of braising pot. I was tempted to make it in my new braiser I bought at Aldi but I had to take our dachshund to the vet for tests in the morning and I didn’t know when I’d have to pick her up so I quickly converted my recipe to a slow cooker version.** I’m sure the breezy French would just leave it on the stove while they pick up their dogs but I am a cautious American. The slow cooker is actually a great substitute because like a braiser, it traps in most of the cooking juices and makes tough cuts of meat meltingly tender. I like this stew around this time of year because it smells and tastes like the holidays without being overwhelmingly “Christmasy”, it is just full of warm spices and bright orange juice, two of my favorite things about winter.

**If you did want to make it on the stove top, add an additional 2/3 cup wine and cook for 2 1/2-3 hours over low heat in a lightly covered braiser, Dutch or French oven, uncovering and turning it up at the end to reduce the cooking liquid.