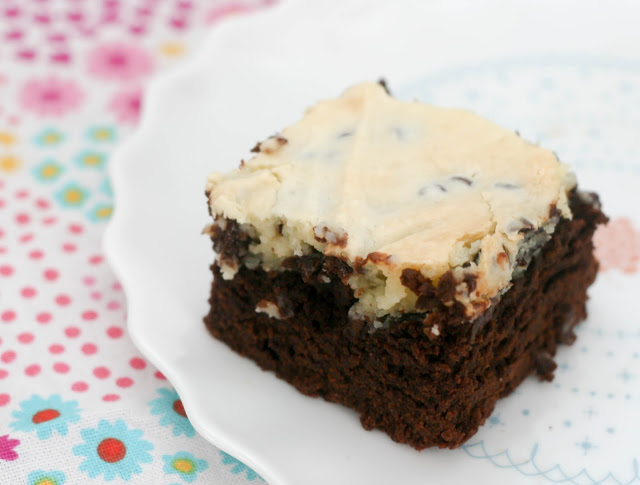 Preheat oven to 350 degrees. Spray with baking spray or grease and flour one 8×8 inch baking pan. Set aside

In a saucepan, melt the butter, cocoa, and chocolate together over low heat. Stir occasionally, and when the chocolate is nearly melted, remove from heat. Whisk until smooth. Set aside.

In a small bowl, stir together flour, salt, and baking powder. Set aside.

In a separate bowl with an electric mixer or in the bowl of a stand mixer, beat together the brown sugar, sugar, eggs, and vanilla until smooth. Slowly stream the chocolate mixture into the eggs and mix to combine. Gradually stir in the dry ingredients and mix until the batter is thick and glossy. Pour into prepared pan. Smooth the top. Set aside.

In a medium bowl, beat together the cream cheese, egg, sugar, vanilla and flour until fluffy. Fold in chocolate chips. Carefully pour over brownie layer. Bake for 40 minutes, or until a toothpick inserted in the center comes out clean or with one or two moist crumbs.

Cool completely in pan, on a wire rack. Do not slice before cooling!! RESIST TEMPTATION!

It wasn’t until a few months ago that I realized that black bottoms, the treat my family has been making for decades, wasn’t a ubiquitous dessert all across the country. Thanks, Twitter! This explains why some people would give me puzzled looks when I’d say that my mom was making a dozen dozen black bottoms to give away for Christmas treats instead of cookies. After all, pretty much every bakery and most sandwich shops (even ones like Heavenly Ham!) in the Baltimore area sell black bottom cupcakes. I can’t find much about their origins online but most recipes have some reference to Baltimore or Maryland or trackback to a recipe that does. Very interesting.

They really should be popular everywhere as they are basically a chocolate cupcake with a cheesecake filling, a universal combo if I’ve ever found one. I’ve made traditional ones, a Nutella-spiked version, and even pumpkin ones over the years. I was tempted to make some today for Valentine’s Day but there are only two of us so I thought I’d stick with something with a slightly more manageable treat and convert them into another chocolatey treat: brownies!

The brownie base is very rich and dark (nearly black with chocolate, hence the name!) but offset by the light, fluffy chocolate-studded cheesecake layer. So, so good. It is tempting to want to swirl the cheesecake but I find it is best to just let it have a layer all to itself for maximum deliciousness.