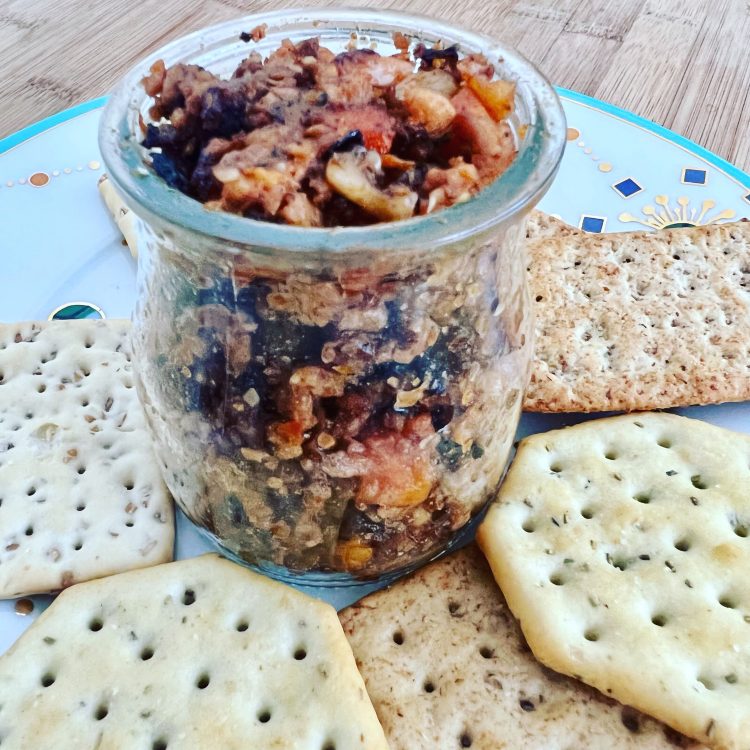 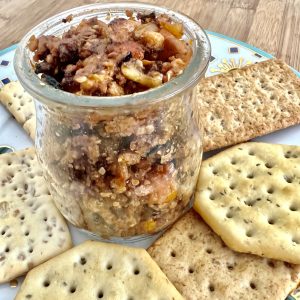 You know I can’t resist a recipe contest! I was excited about this one because one of the products was Big Mountain’s Lion’s Mane Mushroom Crumble. It’s a precrumbled mix of Lion’s Mane, Portobello, and Shiitake mushrooms and can be used as an alternative to beef. When I had gone to the Natural Foods Expo in the before times I tried a lot of mushroom inhansed foods and was impressed with how meaty it could taste. I already have made burgers and things with a mix of both beef and mushrooms so it wasn’t a big leap to think you could just use a mushroom blend (these crumbles also have pea protein and carrots to bulk it up a bit) instead of meat altogether. I love mushrooms!

The theme was “holiday” and I got to thinking about the food we pretty much only make at the holidays. Stay with me because I know this isn’t trendy but one food we normally make is chopped liver. It’s something my husband has fond memories of growing up in a Jewish family in New York City and it’s easy to make with not only chicken livers but the liver that comes in your holiday turkey’s giblet bag. We got in the habit of making it every Thanksgiving with the turkey liver in addition to the traditional Jewish holidays. It is very intensely savory. Obviously, we are okay with eating liver but we have so many vegetarian and vegan family members and friends and even meat-eaters who are just grossed out by liver that I always wished there was an alternative.

Cut to me opening the box of mushroom crumbles and thinking that it looked just like—chopped liver! I had to go for it! I added some walnut to give it a more accurate mouthfeel but, much like chopped liver, its flavor comes from the “meaty” mushrooms and the blackened onions. I’ve always thought that chopped liver’s dominated flavor was onion anyway so it shouldn’t have been a surprise this was such a successful dupe! The texture was very close—we like a chunkier spread vs. a puree–and it was just as intensively savory as the original but was vegan! I can’t wait to make this again at Passover. It was so easy and delicious, I might have eaten it all in one day. It is so much lighter than the original you can do that!